Happy Easter – With a Strobe Light 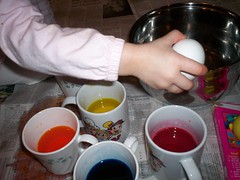 Well, not much to say here. Easter was far less bitter than the days leading up to it. This is remarkable since I decided to take a second whack at creating a lovely gown for myself which also ended up in miserable failure. Dan says Laylee will love using it as a dress-up dress, so some good came out of it. I ended up wearing a skirt I made last summer and the world is still spinning. 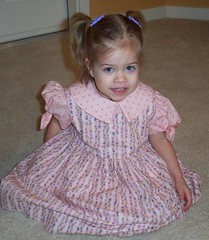 Laylee’s dress turned out cute, as dresses sewn for adorable children often do. The bunny-man was good to us, bringing me a book of Shel Silverstein poems which Laylee has claimed as her own.

The church service was beautiful, the beauty exaggerated by the fact that I was sitting on the stand with the choir and actually had the chance to pay attention for once…and the fact that it was not my three-year-old who pulled the fire alarm during the choir’s stirring rendition of the closing song, “I Know that My Redeemer Lives.” It was much more exciting with the strobe lights and sirens.

We all love the song so much that we just kept singing away while the congregation mumbled nervously, trying to decide whether it would be rude to flee the building when the choir wouldn’t shut the heck up.

When we found out who the culprit was, I was not surprised. That’s just the kind of thing you’d expect from a child raised by parents who grew up in a nudist colony. *wink*

In other news, the weird things meme is circulating again and although I have been tagged before, I have to mention my recent tag by Peter, a man who’s blog, like his business is called The Tutu Boutique and who listed crying during reality TV shows as one of his weird qualities. Dude. His blog is pink. He sells tutus and princess things. Check him out. He cracks me up.

24 Responses to Happy Easter – With a Strobe Light