The Supertaster — Hero or Handicapped

Dan does not like to eat certain things, things that contain flavors, or as he calls them “tongue scorching flavonoids of misery and possible death.” (He has never actually said that with his lips. It’s more in the facial region of expressivity.)

I grew up having jalapeno-eating contests with my dad and drinking Tabasco sauce by the spoonful, like any normal child. Dan, on the other hand, shies away from many of the simple culinary pleasures of life.

Besides bypassing “cranky” foods (Laylee’s word for anything from Altoids to salsa), he also gives the thumbs down on squash, mushrooms, several sea-foods, pig’s feet and anything low-fat.

Until recently I have thought he was a bit of a wimp in the eating department, a strange departure from his usual manly, Rambo-like nature. Then I heard about 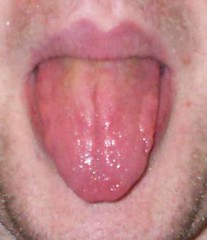 Supertasters are people with an unusually large number of taste buds on their tongue. They truly, physiologically “can’t take the heat.” He has not been officially diagnosed with this… disorder?… but I feel confident that if I blew up that picture and a picture of my tongue, he’d have a veritable gold-mine of the little buds in comparison to me.

The word Supertaster sounds like a heroic power, like he should be able to taste and enjoy food more fully than the average citizen. But in reality, it causes him to miss out on so much of life. He is literally crippled by his over-active taste buds, unable to perform even the most basic nutritional tasks, such as feeding himself Brussels sprouts. We weep for him.

But now the question arises — is he a super hero or just a poor handicapped guy forever doomed to eat bland versions of Thai food that could have been scrumptious, given the proper peppers and spices?

If he’s a super hero, hooray! Having a plethora of extra body parts beats the ability to eat scores of malted milk balls any day (until now, he considered this to be his only claim to super-herodom).

If he’s simply handicapped, then we should get one of those blue stickers for our car so that my super-power will grow to the point that parking spaces really can become the complete focus of this blog. How nice it would be if I never had to think of anything to write again. Every day I’d just post a picture of Vinny, parked in the special wife-to-the-severely-tongue-impaired parking spot at Fred Meyer and call it good.

25 Responses to The Supertaster — Hero or Handicapped