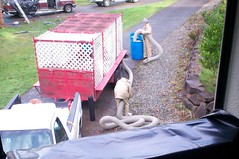 I feel better about the rats today.Â  It’s partly because they’re gone now and I didn’t witness a single body flying down the vacuum tube.Â  It’s a little bit because Dan and his boss looked up these picturesÂ of cute fluffy-tailed rats indigineous to our area.Â  It’s largely because I have an awesome therapist who did some EMDR treatment to get me over my fear of rodents.Â  Mostly it’s because this natural and very common phenomenon appears to be a blessing in disguise.

Several months back I heard a talk from one of the leaders of my church about the tender mercies of the Savior.Â  It was a beautiful exploration of seemingly coincidental events that happen for our good or to lighten a burden and that all that is good comes from God.

I’ve tried since hearing that talk to notice what’s good in my life and give credit to my Heavenly Papa for the fact that I’m still alive and kicking (and sometimes screaming), that I have a house to share with the rats, food to overcook, sweet kids to barf on me, a loving husband who’s not perfect and understands that neither am I, and a beautiful world to flood me and freeze me out.

The rats, the rats.Â  How can you be grateful for the rats, Pollyanna?Â  Well, I’ve found a way. 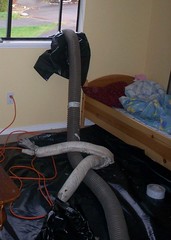 Our home inspector was, ahem, less than thorough in his report.Â  He said the electrical was fine, which it was… after we replaced nearly every outlet in the entire house the first week we lived here.Â  He said he couldn’t exactly date the roof but his guess was about 6 years old.Â  It turns out it’s a rotting 17-year-old roof with a maximum 20 year life span.Â  He noticed “seasonal moisture” in the crawl space and suggested we get a little gravel to solve the problem.Â  Contractors will soon be involved.

He said the attic was clear of pests.

So our lovely pest control agents in their boy-scout-looking uniforms have been working for two days and counting.Â  They have found in that “clear” attic several beehives, various rodent droppings and nesting areas and a THREE FOOT WIDE BIRDS NEST.Â  This picture is of the nest after he’d already removed half of it.Â  What was nesting up there, a Stork?Â  I guess I’d better take a pregnancy test.Â 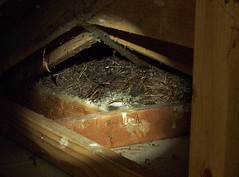 Maybe we should have had them leave it so we could do our Christmas Nativity up there. That nest would make a lovely manger.

Maybe we should have had them leave it so we could do our Christmas Nativity up there. That nest would make a lovely manger. 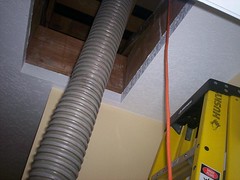 Not only this, but they found that it was harder to remove the insulating than it should have been because the roof had a couple of major leaks and the insulating was completely saturated down to the sheetrock.Â

Maybe we should have had them leave it so we could do our Christmas Nativity up there. That nest would make a lovely manger.Not only this, but they found that it was harder to remove the insulating than it should have been because the roof had a couple of major leaks and the insulating was completely saturated down to the sheetrock.Â So here’s where the rats are a blessing.Â  If we hadn’t noticed mouse poop and called these guys, we never would have known that there was standing water in our attic.Â  We would have discovered it when the ceiling crashed in over our bed.Â  As it is, we discovered it before it did too much damage to the sheetrock.Â

We’d noticed the droppings several weeks ago, but I didn’t get around to calling in help until this week.Â  It just so happened that as the pest control guys were discovering the roof holes, some roofers were finishing up a new roof on the house next door.Â  They came right over, climbed on the roof and patched up the holes with the pest control guy helping from inside.

The only payment they would take for the job was some peanut butter cookies and the use of my jumper cables to start their old truck.Â  Kind people = I like them.Â  They could have charged me anything and I would have had no idea if they were being reasonable or not.Â  What are the chances that a kind honest roofing crew would be working next door at the exact moment we needed them?Â  I think sometimes God just gives us a break.Â  Heaven knows I was ready for one.

All the experts agree that we will need an entire new roof in the spring but it’s fixed enough to hopefully get us through the winter and no major damage done.Â

Laylee asked why the rats came in our roof.Â  I told her that they were looking for a warm place to spend the winter.Â  She asked if they could have our old roof once we get a new one so they can stay warm and dry.Â  Why yes they can.Â  I’m sure they will have no problem finding the old roof down at the landfill.

This entry was posted in blick, domesticality, faith. Bookmark the permalink.