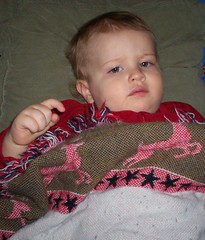 Last night Magoo’s month-long-already-been-to-the-doctor-and-she-says-it’s-nothing cough turned nasty, he sprouted a decent fever and some pretty sweet green elevens.Â  All night long he coughed and hacked and yelled, “Mo-mmy! OWW-EEE!”Â  He slept best when sitting upright on my lap so you can imagine how much sleep I got.

This was complicated by the fact that we thought we’d take one more whack at getting Laylee to stay dry through the night.Â  We’ve tried pretty much everything.Â  She just really likes peeing in her pull-up.Â  You think I jest, but oh no, I do not.Â  She will wake up, walk into my room, get this spaced out look on her face while I’m talking to her and then announce that she just had a “pee-splosion”.Â  Sometimes she refuses to use the potty before bed but then goes in the pull-up 3 seconds later while I’m reading her story.Â

Last night I decided that enough was enough and she would simply have to stay dry through the night.Â  At about 2 am, I was leaving Magoo’s room and I found her in a pee-soaked shirt, new underwear, no pants, sleeping in a sleeping-bag on the floor next to her saturated bed.Â

All day today I walked around in my pajamas, smelling pee in every room.Â  What did she do, take a pee tour of the entire estate?Â  It was driving me nuts.Â  About 4:30 this afternoon I bent over to pick something up and realized that the smell was coming from my t-shirt.Â  When I picked her up last night, I guess she had rubbed off on me.Â  Blick!Â  I’m considering beginning a strict regimen of personal hygiene the next time I get more than 3 straight hours of sleep.Â  This will involve showering daily and possibly wearing new clothes each day, particularly when the ones I have on are drenched with dried human waste.

But the day was not without humor.Â  Laylee has started a new style of joke.

All through dinner the little coughing melon-head cried his brains out.Â  We did everything we could think of to make him more comfortable.Â  Juice?Â  Loosen your high-chair straps?Â  Tylenol and cough syrup spritzer?Â  Hot stone massage?

Nothing helped.Â  We decided bed was the answer.Â  As I picked him up, Dan noticed the giant splotches of ooze, spilling over the bottom half of his gingerbread PJs.Â  The one thing we hadn’t thought of!Â  All he needed was a new bum.Â  Now he’d been sitting in killer sandy acid pear poop for half an hour.Â  OH, the humanity! 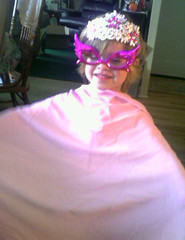 As I was soaking him in a warm bathtub, Laylee and I had this conversation:
Laylee:Â  Magoo was so sad at dinner.Â  It makes my heart hurt.
Me:Â  Oohhh.Â  Me too.
Laylee:Â  Why was he so sad?
Me:Â  He had ouchy poop and it was burning his bum-bum.
Laylee [eyes widen.Â  A minute goes by.]:Â  Can I see the light?
Me:Â  What light?
Laylee [peering sideways over the side of the tub]: The fire light.
Me:Â  What fire light?
Laylee:Â  The fire light that was shining out his bum when it got burned.

Now you want to know if I let her see it, huh?Â  I would tell you but I’ve got to go change my shirt and teach Magoo that he’s pronouncing one of his favorite words incorrectly.Â  There is no “H” in “sit”.

This entry was posted in aspirations, blick, family fun, near-death. Bookmark the permalink.

31 Responses to A Serious Mom Day