Are your kids on a first name basis with your car rental return guy?Â  12 hours ago I would have said “Neither are mine.”Â  Not anymore, people, not anymore.Â  We are all now intimately acquainted with Brian and he with us.

When he leaves our side, Laylee asks, “Where’s Brian?”

“Oh, he just went to forage for food or check on the road conditions,” I will answer, “He’ll be back in a minute.”

Sometime after the flood and the first freeze and well before the wind storm and subsequent attack of the Ents, our minivan Vinny got rear-ended and went into the shop (this was during the pre-rat era).

We’ve been driving a rental car for the past 3 weeks, a sweet rental car, a rental car exactly like Vinny only 5 years younger and much more pimped out.

Today we got Vinny back.

2:45pm — After determining that the “big storm” was just a “big non-event,” we head out to a doctor’s appointment in the rental van.

3:30pm — The body shop calls to tell us our van is “ready for pickup”, a secret code that means “if you don’t come pick it up today and return your rental car, you’ll have to pay a gazillion dollars because the insurance company won’t be footin’ the bill any more.”Â  I get the hint and we head to Hertz.

3:45 — Crazy hail pelts my skin as I frantically scoop crumbs from the car at a gas station.Â  Have you ever traveled 2500 miles in a borrowed car with 2 kids in tow, only to be suddenly told that you had 15 minutes to get the car back to its meticulous owner?

3:50 — Magoo lays waste to the Hertz office, attempting to use the contents of the water cooler to create a recreational wading pool.Â  Brian’s co-worker distracts the children with a nerf ball while we finish filling out the paperwork.

4:00 — We begin the one mile trip to the body shop in the continuing hail with Brian at the wheel.Â  I am SOOO glad not to be driving.Â  He possibly thinks my children are cute and still considers having a child of his own one day.Â  Tee hee hee. 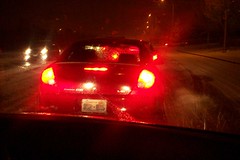 4:15 — The hail turns to snow and Brian carefully makes his way down a hill as cars are spinning out all around us.Â  Soon no cars are spinning because no cars are moving.Â  Traffic comes to a complete stop and Laylee wants to know why we’re not going anywhere.Â  I call the body shop and the owner agrees to stay open late until I can get there. 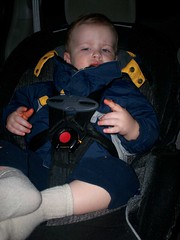 4:20 — I ask Brian his name and introduce him to Laylee.Â  It looks like we’re in it for the long haul.Â  Magoo cannot stand being strapped in anymore.Â  The sight of me sitting next to him doing nothing to ease his sadness is too much to bear.Â  He begins to wail.Â  “Brian, do you mind if I move to the front seat with you.Â  I think Magoo will be happier if he can’t see me directly.”Â  Brian would be much obliged to have me ride shotgun while my son screams like a banshee in the backseat.Â  It would be the best thing ever.

4:25 — Magoo calms down and the peasants rejoice.

4:30 —I remember that I can’t remember the last time Laylee’s been to the bathroom.Â  I ask Brian not to mention anything related to the p-o-t-t-y.

4:40 — Laylee urgently calls out that she needs to go POTTY.Â  This means NOW.Â  I ask her to wait.Â  She can’t.Â  I tell her she can go in the snow on the side of the road or I can change her into one of Magoo’s diapers right there in the back seat.Â  “That’s alright, isn’t it Brian?Â  The car’s not going anywhere.”Â  Of course it’s alright.Â

5:00 — Having convinced the loudly protesting Laylee by brute force that a diaper IS a good idea, I get back in the front seat with Brian.Â  Realizing that this may turn out to be bloggable, I ask Brian if I can take his picture. 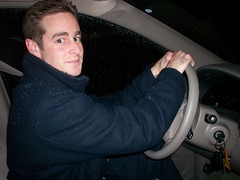 5:15 — We still aren’t moving, Laylee and Magoo are starving to death and the only food in the car is emergency protein bars.Â  I walk up and down the cars trying to buy goldfish crackers from the stranded travelers but find no suppliers.Â  Motherhood can make you desperate.

5:20 — I return to the car empty-handed, vowing to keep a Costco pack of animal crackers in my handbag till college do we part.Â  When I suggest to Brian that I may run over to the office building up the hill to see if they have a vending machine, he graciously offers to do it for me.Â  According to Brian, the kids asked for me when I left the last time.Â  I think he’s making it up.

5:25 — Traffic moves 3 inches.Â  Laylee asks where Brian is and begs me not to leave him.Â  I make no promises. 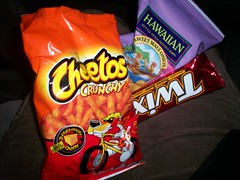 5:30 — Brian returns with chips, Cheetos, a Twix bar and a head covered in snow.Â  Apparently the machine wouldn’t take my $5 so he paid for the snacks himself.Â  I kiss his feet and the children munch away happily. 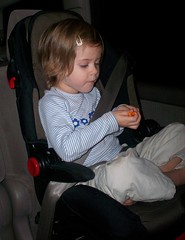 5:45 — At Laylee’s request I begin singing Kookaburra, Baby Beluga and the 3 Bears song.Â  Our lyrically challenged car rental return worker turns down my offer to join in the singing. 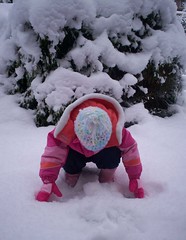 Shortly after 6pm we arrived at the shop, transferred our ten tons of stuff into our beloved van who now looks prettier than when we first met him.Â  After bidding Brian a fond farewell, we drove 2 blocks to a local shopping spot, where we ate dinner, went to the movies and just generally wasted time for 4 hours.Â  At 10pm we headed home across the layer of ice covered in hail covered in snow.Â  It was like driving on ice coated gravel 15 miles per hour.Â  Around 11:30 we arrived home after the scariest drive of my life.

I will say that the conclusion of this weather event is the best we’ve had all season.Â  We still have heat and power, several inches of snow to play in, fresh banana bread to eat and a new friend Brian at the Hertz dealership.Â  Last I heard he was planning to walk back to work and try and find somewhere to sleep in the area.Â  We wish him well.Â  I hope he’s man enough to have kids one day despite the hazing we put him through.Â  They are worth it.Â  I bet Brian had no one to comb their hair with a dinglehopper during dinner last night, no one to wipe cheese dust off of, no one to build an imaginary snow cave and sip hot cocoa with this morning.Â  Poor guy… on so many levels. 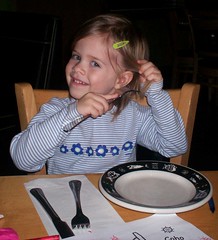 This entry was posted in around town, driving, kid stuff, near-death, parenting. Bookmark the permalink.

36 Responses to Hertz So Good