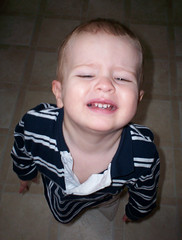 Things have been a little strange around our house lately. I refuse to buy bread but I can’t remember how to make it. There is a pink balloon floating around my kitchen, which I think may be partially to blame.

I just cut Magoo’s hair for the first time and although he looks very much like a POW, I still love him madly.

After 2 weeks of flaming acid poo, we now hose him off instead of using wipes. It’s cool because I think he’s becoming so much like me. I am fairly confident that I would also shower if I ever soiled myself.

When we pray with him, it goes like this:

Laylee and I both have minor colds and spent a good portion of the day fighting over whose cold was worse. I totally won because if you fight about how sick you are while bouncing around the room like a muppet Kangaroo on Red Bull and asking the other person to play games with you, you’re automatically disqualified.

For the past few nights, Laylee has requested Dancing Queen by ABBA for her bedtime song. She’s also requested songs by Bob Marley. I sing while Dan contributes vocal percussion.

She’s really sad she can’t marry Magoo. I told her she’d be arrested. I told her it could never work. She says “He’s the best boy I’ll ever know” and she’s probably right. I told her that if she still wants to marry him when she’s 18, we’ll talk about it again.

On the phone with my sister, Laylee said that I made really good Spaghetti-O’s for dinner and she loves Spaghetti-O’s and that makes her very proud of me.

If I could stop eating the Cadbury mini-eggs, I’d be very proud of me too.

21 Responses to Some Life