Sometimes they get hungry together and then you’d better watch out. This weekend I met up with some bloggy friends new and old for a lunch at Ivars in downtown Seattle. 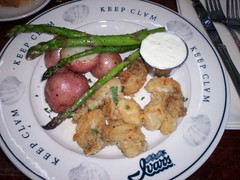 I like Ivars because you can smell fish guts both outside and inside the restaurant, only they smell more appetizing inside and if you stand outside long enough seagulls will poop on you. They also have great food and this weekend they were thoughtful enough to give us over an hour to chat from the time we ordered our food until it arrived.

Sometimes, if you ask for them to open the rolling blinds on the skylight above your table, they will do it, even though they didn’t even know there were blinds above your table until you pointed them out. One of your friends might suggest that it’s not such a bright idea since opening the forgotten blinds may cause bugs or possibly dead birds to rain down on your table.

Your friend would be wrong. Only large flakes of grey and white dust would rain down on your table. But it would be okay because you would have gotten your food by that time and so there’d be something to cushion the dust’s fall.

The food was delicious and there was some awesome conversating. Only a group of women who narcissistically write about EVERY SINGLE DETAIL of their lives on the internet could make a lunch date last for 4 hours.

Kimberly graciously knitted this awesome scarf for Laylee which Magoo has adopted and likes to wear tied around his head while he does ballet. She also shocked everyone by eliminating the separate checks awkwardness and just picking up the tab like any good Canadian blogger would do in such a situation. I mean, if you’re gonna drive to another country to humor some internet friends who are dying to meet you, the least you can do is pay for EVERYONE to eat lunch. Thanks Kim!

Jenny was as fun and adorable as she seems on her blogs and the lovely Colorado sisterhood were all shiney and pretty but hard to talk to from the other end of the table. “HOW LONG HAVE YOU BEEN BLOGGING?? I SAID BLOGGING!”

Millie and No Cool Story were as awesome as ever. I just wanted to stuff them in my purse and take them home. I actually offered… 2 or 100 times and they politely declined.

Carrot was amazing to come out to this insanity with only a few days until her C-section. She looked great but would rather not have her 10 month pregnant picture plastered all over the internet.

Then there was Ordinary Mom, far from ordinary (in a good way), super cute and very fun. She lives near-ish and I hope we get together soon.

You should also check out Bella’s blog because she has a gorgeous speaking voice, 7 kids and she looks like a rock star.

At the end of the four hours people tried to head home and I pathetically chained myself to their legs and begged them to come over to my house for a sleepover because, really, having a life is totally overrated. No one took me up on it. “SPAGHETTI! I can make you spaghetti. Dan bleached the countertops and did I tell you all how pretty and sweet smelling you all are? I have a puppy over here in my van. Wanna come see?”

No takers. 4 hours of lunch with strangers is apparently enough for some people.

Until next time, my fun fishy friends. Oh, and by the way, Eve did come home with me because I was her ride and she just plain rocks and lives approximately 4.35 feet from my back door. As a reward, she got the best waffle cone ever and spaghetti AND as much water as she could handle because my refrigerator door is generous like that.

This entry was posted in Blogging, food, Friendship. Bookmark the permalink.