Mudder’s Day and a Sack of Frogs

I can safely say the best part of the weekend was listening to Laylee say “Mudder’s Day” around 400 times. Happy Mudder’s Day. I’m so glad it’s Mudder’s Day. Did you know I get to sing in church because it’s MUDDER’S DAY??!!! You are a wonderful mudder!

Ah. I hope she’s still pronouncing it that way when she’s 15. By age 16 the other kids might start making fun of her.

For as long as I can remember, I’ve watched the 4-12 year-old kids at church go up to the front and sing to their mothers on Mudder’s Day. I cry every time. This year Laylee was finally old enough to go up and sing. She was almost Â¾ as excited as I was.

She stood in front of the group of kids, her chin resting on her folded arms up against the short wall next to the podium. Luckily her jaw is strongly hinged (she gets that from Dan) so her face didn’t actually split in two from the gigantical grin. As the other kids started to sing, she jumped a few inches and looked back with furrowed brows, like “what is all that RACKET?” 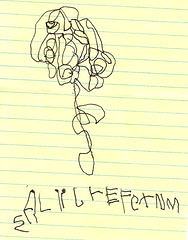 As far as I could tell, she didn’t sing a word, just stood there grinning and waving at me. It was truly one of the best moments of my life. She had asked me to bring my Mudder’s Day card and wave it while they were singing so she could tell which one was her mudder. I forgot. But I’m pretty sure she could tell. Her eyes stayed locked on me for the few minutes they were up there… and when they finished singing… and when the other hundred and thirty kids had left the stage… and a teacher had to lift her up by her elbows and point her towards the exit.

She ran to me for a hug and drew me this picture. I chose not to guess what it was so she told me. It’s a WHOLE sack of frogs!

This entry was posted in family fun, parenting. Bookmark the permalink.

31 Responses to Mudder’s Day and a Sack of Frogs