Saving the World, One Piece of Living Slime at a Time 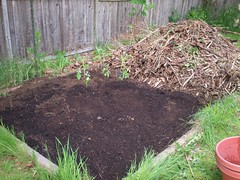 Sometimes I like to play a game called “If I Were A Rodent, Where Would I Build A Nest For My Babies?” This game gets boring because the answer is always the same — out in the bamboo pile in the corner of the Daring Yard, where the garden is supposed to be.

I keep telling Dan this and he laughs and tousles my hair. “No vermin are building a summer home in our… vermin summer home.”

So, this weekend when I went to clear the pile and plant a garden, I asked Dan to first take a pitchfork and ram and twist it around in Hotel Rodentia. He swore he did this but I happen to know he doesn’t even own a pitchfork. 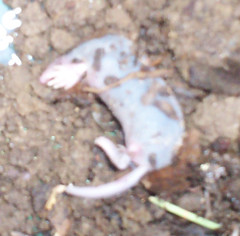 I started to have a panic attack at the sight of these mutants but for the sake of my children, I did some breathing and positive self-talk, scooped them up onto my shovel, let the kids look at the “cute, cute adorable wittle mousies,” and then hucked them over the fence into forest.

Laylee was crushed. She said they were her pets, that she loved them and she made me promise not to throw any more into the forest so that they wouldn’t get stomped by a Bambi-deer or eaten by a tiger. 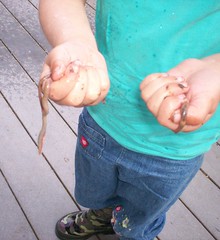 She befriended many other beasties today. A week ago she wouldn’t touch dirt without gloves on. Today she was scooping up piles of slimy worms and sorting them into family groups. She told me how much she liked helping “udders” and saving the worms by laying them out flat on the dry hot deck with their new parents and siblings to happily become worm-jerky. I gently explained that they might like it better in a bucket with water and dirt so now each family of worms is in a different cup of dirt, scattered around the yard where Magoo can never never find them.

She even brought me a slug in a cup. “He is my friend. I like him. I put him in this bucket so he can have everlasting life. That means he lives forever.”

After the rodent incident (Wikipedia thinks they’re moles), I continued to clear and rake and plant until we had a nice little garden of dirt out back. Laylee helped water the garden and then stuck the spray nozzle in my running shoe until it was completely saturated while I changed laundry loads. “I wasn’t trying to get your shoe wet. I was trying to get the ground under it wet and it must have gotten in the way.” Ya-huh? Would you like help unwedging the nozzle?

When Dan got home, she told him about ALL the pets, including the future moles we are bound to find if we ever clear out the rest of that bamboo. “Mom is not throwing any more into the forest because they are very tender to ME. They are my pets and I love them.”

This entry was posted in blick, domesticality, family fun. Bookmark the permalink.

27 Responses to Saving the World, One Piece of Living Slime at a Time