A Cup of Pooh, A Box of Snails and a Pack of Bubble-Yum 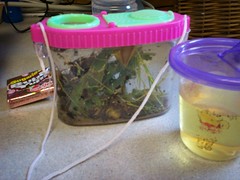 This is what’s become of my kitchen counters. Is it sick that this sight fills me with glee? Don’t answer that. I have a kid, a real kid. No baby girls here no more.

Sure she still has a few mispronunciations. She says “baft-yobe” for “bathrobe” or “yobe” for short. She also does funny things with singular and plural. Recently she pulled an “ear-wack” out of her ear. There was only one and we all know “wax” is plural. Our friend Mr Burns is known to Laylee as “The Burn” because we say “The Burns” when we’re talking about the whole family. 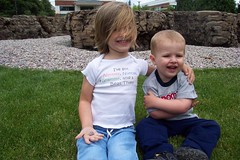 Today The Burn went frolicking with Laylee in the fountains outside Megacorp. We had just stopped in to check the progress on the recently reinstalled grassy knoll around the undulating sculpture and to score some chocolate milk.

Laylee asked me if we could drive to the place where the sky and clouds come down and stick to the ground. I started to tell her there was no such place and explain how the horizon always keeps moving no matter how much closer you get to it. Then I stopped and told her I’d never been there and maybe we could go sometime together. I then decided to make my fortune writing greeting cards.

She said that next time we’re on an airplane we could ask “the man” if he would open the window. Then we could scoop up some of the clouds and put them on our laps. When I asked her what we would do with the clouds, she told me she would shove them in her bug house to make a soft bed for her snails.

In Old Navy, she started dancing spontaneously and looks well on her way to becoming quite a fine breaker:


Photo Sharing – Upload Video – Video Sharing – Share Photos
Today I told Jeana the reason I’m having trouble feeling the urge to blog lately and she said, “I could not be more surprised if you told me the reason you were in a slump was because you were spending so much time reading Kevin Federline’s blog.” Personally I find it interesting that Jeana knows about his blog and I would prefer that she referred to him more respectfully as K-Fed next time she decides she would like to “git” all up in my grill about him.

Later on I narrated the entire Nutcracker from memory so Laylee would know which character to dance like. I made soup for dinner, scored some free dining chairs, fed a snail, convinced Magoo that he prefers edamame to pizza, saved my Riverside Shakespeare from certain death, and asked a sales associate whether this was a “dress” or a skirt for members of the WNBA. Who knew they liked to shop at Old Navy?

My life is full.

This entry was posted in fun, fun, fun, kid stuff. Bookmark the permalink.

24 Responses to A Cup of Pooh, A Box of Snails and a Pack of Bubble-Yum