When Elizabeth Edwards is Speaking at BlogHer, I’m a Conservative

At church I’m a liberal.

I am repeatedly amazed at the complex nuances of personal political identity and the bizarre need we feel to categorize each other along party lines. This becomes confusing because the way I’m categorized changes dramatically depending on whom I happen to be sitting next to. In an LDS Sunday School class, I’m fairly liberal. In the BlogHer organization, I feel like some sort of right wing extremist. 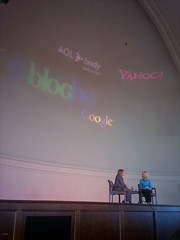 Elizabeth Edwards was the closing keynote speaker for the conference on Saturday afternoon. I knew in advance that I wouldn’t agree with many of her political views but was fascinated to hear her speak. She is an intelligent, strong, candid and passionate woman who has long been involved in blogging and maintains a blog on her husband’s campaign website.

However the questions very quickly turned to policy and much of the time was spent discussing her husband’s platform. The meeting came to feel very much like a campaign stop, with talk of how Senator Edwards’ positions differ from other leading democrats and even a statement that she assumed everyone in the room believed pretty much the same things with regards to women’s issues.

You cannot talk to a diverse room of women about your plan for universal healthcare and assume we all believe the same things. Growing up in Canada, I watched a friend’s mother die BECAUSE of socialized medicine. Although I want everyone to have access to health care, I’m not convinced that John Edwards’ plan is viable.

You cannot talk to a diverse room of women about your views on abortion, the Iraq War, gay marriage and other highly divisive issues and assume we all believe the same things.

Anytime we create an assumption of political consensus in a group of intelligent thinking adults, we’re headed for trouble. By saying, “I’m sure we all agree,” in essence what you’re saying is, “Any sane intelligent person would agree with me,” and I have a problem with that.

So although I vote for various parties at election time, register as a Democrat in the primaries and consider myself an independent, I raised my hand to speak to the fact that the discussion was being dismissive to conservatives. There was time for one more question and Elisa Camahort handed me the mic, potentially annoying several other eager people in order to let a conservative have a voice. I’m very grateful.

I’m not actually sure what I said since I was shaking at the time, standing in front of several hundred people and directly addressing the possible future first lady. The session video was uploaded to the BlogHer site but my question is strangely missing, an occurrence I assume was no more sinister than the video blogger running out of tape at the end of the session, but which strikes me as an odd coincidence.

Basically, I pointed out that the session had been dismissive to conservatives and that since I wasn’t planning on voting for her husband, I’d rather talk about blogging and technology than the specific policy of the Edwards campaign. My question was, “How many people review your blog entries before you post them to the internet?” Her answer was, “ZERO!”

I was amazed. With all the spinning and planning and message management that goes on in a presidential campaign, I am completely blown away that she is given total freedom to express herself on the Edwards 2008 website. Now I’m sure she is in constant contact with John and his many advisors and she’s smart enough to know which way the wind is blowing and where she should funnel it. Nonetheless, it was refreshing to hear this response from her.

Regardless of our political differences, I have great respect for Mrs. Edwards and feel strongly that she is sincerely doing what she feels is right and standing up as a bold force to promote her beliefs.

A friend (not a conservative, if that makes any difference) came up to me after and said she had the same problem. The whole discussion was too political and party-specific for such a diverse group, especially for the closing keynote of a blogging conference.

She gave the analogy that it was similar to inviting the head of Google to be the closing speaker and then letting him spend most of the time fielding questions about how to use Blogger software.

At the end of the closing session, someone asked me, “If a Republican had been the speaker and the conversation had gone the same way, would you have called her on it too?”

Absolutely yes. Although it’s hard to imagine that I’d need to. With the number of bold articulate women of the left in that group, people would have been tripping all over themselves to bring the discussion back on track.

I’ve heard Lisa Stone say that BlogHer is a nonpartisan organization and that if you have a different opinion, you should stand up and make it known. I often think those of us with leanings to the right feel so outnumbered that we’re afraid to speak up. I for one do not want to turn my site into a political blog because I enjoy the fact that I have a diverse group of readers and I like DaringYoungMom as a place for us all to come and be silly together.

However I’d like to be more of a catalyst for diverse political discussion among female bloggers in the future, if not on my personal site, then elsewhere.

Julie Marsh has written about this over at The Imperfect Parent and you can see most of Elizabeth Edwards’ interview on the BlogHer site, minus my question at the end. This is cross-posted to BlogHer.org.

This entry was posted in blogher07, elizabeth edwards, get serious, women. Bookmark the permalink.

65 Responses to When Elizabeth Edwards is Speaking at BlogHer, I’m a Conservative