The answer to the question — “Where do you keep the scissors?” — should always be — “Higher.” 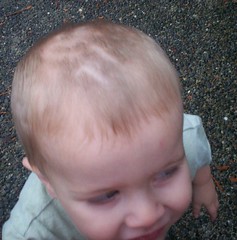 Today Laylee gave Stephanie’s 3-year-old a serious mullet. She shaved groovy designs in Magoo’s tender scalp, and was just taking her turn in the butcher’s chair when I walked in to see what the kids were up to. Half of her pony tail was on the floor. Luckily it was the top half.

I’m just glad she’s not old enough to notice how uneven it is after I “fixed” it for about half an hour, around and around in circles with the scissors, shorter and shorter and always the little crazy feathers and tails hung down mocking me. 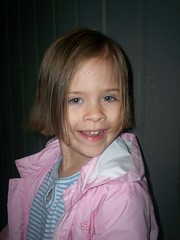 So it’s sort of bobish and Magoo’s is baldish. I had to shave it shorter than his eyebrows in order to get to the point that he didn’t look like he was losing his hair in chunks due to some hideous mange. I hope his friends can still tell that he’s a mammal. I wouldn’t want him to be mocked on the playground. 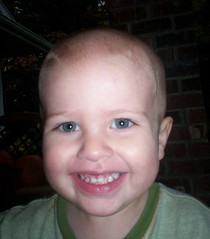