You can get hearing aids with zebra stripes these days or leopard print. Laylee’s got her heart set on a dainty set with pink flowers. They’re small like her ears and hopefully won’t fall out when she’s running around the back yard or playing tag at school. 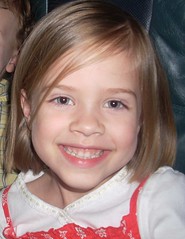 I told her they’re like glasses for her ears, that even though she can hear fine now, she’ll have SUPER-HERO ear power when she gets her new ear jewelry. I told her she was lucky to get them. I didn’t tell her it was no big deal because telling her that implies that her hearing loss might be a big deal and I never want her to think that. But it’s sure a big deal to me in this moment.

This morning I drove her to a hearing and speech clinic to have her ears checked. We’ve noticed some problems and the more I’ve looked the more problems I’ve noticed. I tried to tell myself I was imagining things. It took some coaxing from my next door neighbor before I took her in to get tested.

Her preschool report card listed her as advanced in nearly every way. The only areas where she was “satisfactory” were things like “needs repeated teacher directions,” “displays listening skills” and “easily distracted,” things that could be easily explained if she were having trouble hearing. I can stand behind her and talk about ice cream in a loud whisper and she has no idea I’m saying anything. When I call to her from a distance, it seems like she’s ignoring me.

The doctor put a camera in her ears and projected the image on a large monitor. Aside from a stray “ear whack” or two, they looked lovely. He said there was no damage from the gazillion ear infections she’s had. Good news.

Then into the booth we went. The doctor said I could stay with her if Magoo and I could stay quiet. Ahem. Yeah. So we stayed in the booth for a few… seconds before he came back in. For some reason Magoo’s constant seemingly-involuntary whispers ruined the effect of the sound-proof booth and we were kindly asked to leave. Laylee was nervous to be alone but she hung in like a trooper while we waited in the lobby for some news. Magoo asked me to read star dating news to him from an old People Magazine. Before we even found out if John-ifer would live happily ever after, the doctor came back and took us into an exam room.

He was sweet and had a good bedside manner but he also spends all day doing this and seemed very casual about the news he delivered. She has some hearing loss which makes it impossible to hear certain frequencies at certain volumes. What she’s missing are consonants so what she hears when someone talks softly or from far away is a jumble of vowels that mean nothing to her.

“Is it something she’ll outgrow?”

“Oh no. It’s permanent…. [something about hearing aids.]”

“Was it caused by her ear infections?”

“No… [something about nerves being dead and a special microphone her teacher will need to use when she starts kindergarten next year.]”

“With these diagnoses, we always recommend a second opinion so you can schedule that at the same time as your hearing aid consultation.”

Because I am the best mom in the world, I was able to freeze my face into a grin to avoid squeezing anything near the eye area, which would likely have let forth the blast of weepage building in my throat. I stayed cool and Laylee was unaffected by the news, possibly because she did not hear the news.

So the new hearing aids do look cool… for hearing aids… but I’m conflicted. They’re not really like glasses, not completely. You do not see kids all over with hearing aids the way you do with glasses. I want to ask the doctor if Laylee has to wear them all the time and I picture him responding, “Um… only when she wants to hear well.” Even wanting to ask that question makes me feel like a bad mom, too concerned with appearances like the mean aunt on Anne of Avonlea who never lets her niece wear those “ridiculous spectacles” even though she’s practically blind without them.

Of course I want her to hear well but I don’t want her to feel self-conscious. It will shred my heart if I have to watch her confidence wither, to realize there’s something different about her and start to think it’s a bad thing. I will not allow it.

I have so many questions I was too shocked to think to ask until after I left the office. Is it degenerative? Will she continue to lose hearing? Are there any other options for treatment? What COULD have caused this if it wasn’t the ear infections? All afternoon my brain has conjured up images of loud concerts we’ve attended, fireworks displays, times she put on my head phones with the sound turned all the way up. How could I have protected her better?

I keep thinking of times I scolded her for not paying attention or coming when I called her. I want to squeeze her and never let go, to buy her ridiculous things we don’t have the money for that wouldn’t help anything. I feel guilty for joking around in this post, a post which seems cruel and in horribly poor taste at this point.

But at least the doctor seems to think I’m a good mom. He said he was impressed that we were paying close enough attention to catch it. This type of hearing loss can often be misunderstood as a lack of attention or inability to listen to instructions.

I really am glad we did and that we can help Laylee to be more successful. I’m grateful that we have the means and the technology to help fix what’s broken. I just always wish my children would have perfect lives or at least that I could choose their trials. Maybe Magoo could have a mean friend in 2nd grade who taunts him for a couple of weeks to teach him humility and then moves to Siberia so Magoo can get on with his life. For Laylee I might wish bad hair or an inability to learn the Cha-Cha well enough to compete on an international level.

This entry was posted in get serious, health, kid stuff, not feelin' the funny. Bookmark the permalink.