A Funeral for Hope? 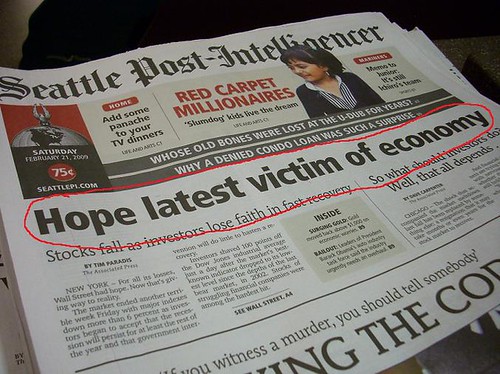 Yes, it’s true. According to the Saturday Seattle P.I., hope is dead. While the rest of the country was desperately doing chest compressions, the Post Intelligencer decided to cover up a yawn and just call it. Time of death – 2am, Saturday, February 21st.

It’s sad that they’re such Debbie Downers but they’re not the only ones. Despair makes for drama and drama makes for exciting news. I can’t count the number of times I’ve heard a news anchor use the words “Great Depression.” I keep waiting for the black and white street urchin photos to start being rolled out.

And have you heard the latest Hyundai promotion? If you lose your job within the next year, you can return the car with no penalties. My first thought was, “That’s nice.” And then I thought, “Oh wow, that’s depressing!”

I wonder if they’d extend the same deal to small business owners who lose so much business that they can barely keep their heads above water or people whose hours or commissions are cut drastically. Just because someone isn’t laid off doesn’t mean they’re not affected by the crappy economy.

It’s pretty scary out there and we’re watching the current economy affect everyone around us but I have to say that I still have hope. I’ve seen people reach out to each other with amazing acts of kindness and offers of help. I feel a sense of community and family growing because we’re all realizing how much we need each other.

That’s not hopeless. It may just be the most hopeful thing I’ve seen in years.

This entry was posted in around town, get serious. Bookmark the permalink.

13 Responses to A Funeral for Hope?