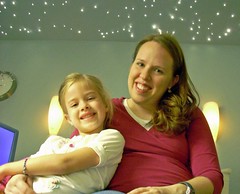 So, we did end up taking Laylee to the ultrasound and I’m so glad we did. She was fascinated by everything, especially the part where the baby peed right “on camera” and the doctor replayed it a few times for her in slow motion.

“Is he spitting something out?” I asked.

Laylee thought that was hilarious. And the doctor informed us that from the pee pattern it was very obvious that my 100%-sure-it’s-a-boy baby is actually female in nature and very healthy from all outward indications.

The doctor was extremely thorough, even bruisingly so, measuring every major bone and heart valve. When I asked if he was completely totally for real for real sure it was a girl, he said, “As I said,” with such authority that I had to believe him.

I was shocked at how happy that made me. All along I’ve thought this baby was a boy. Before I was ever pregnant, I KNEW our next little guy was a little guy. I had no doubt about what his personality would look like. I was fine with a boy.

But when my sisters left earlier this month, I told Dan through my tears that a part of me wished it were a little girl. This could be our last baby and I think every girl needs to have a sister. I know that boys would likely say that every boy needs a brother but I have never been a boy so I can’t vouch for that.

My mom knew it was a girl all along. She says it’s because of a premonition she had while picking out clearance baby clothes at Kohl’s. So her shopping wisdom trumps my parental intuition and two medical professionals’ ancient Chinese gender tests. She IS a great shopper.

So yay. Any baby name ideas? We had the boy named and ready to go. But little Wanda’s got nothing in the way of an offline name. If I use the name you share with me, I promise to email and let you know.

This entry was posted in preg-nancy, women. Bookmark the permalink.

55 Responses to The Personality