Sleep of the Spoiled 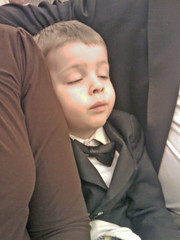 The kids didn’t die on the Titanic but you couldn’t tell that to look at them on Sunday during church. Both of them fell asleep during the first hour of the meeting. Magoo was sitting bolt upright between my parents in his little bowtie, snoring with abandon.

Laylee had flung her body face-down across my lap with the statement, “It doesn’t hurt me when you rub my back.” I took that as an invitation and began rubbing back and forth in what was apparently a 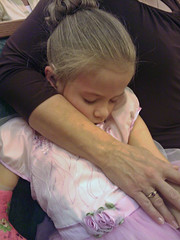 sleep-inducing rhythm because when the meeting was almost over, I pulled her upright and she flopped over coma-like into Grammy’s arms.

It’s been months since Magoo last fell asleep in church and years for Laylee. My parents joked that they must be the most boring grandparents on earth to cause both kids to conk out like that. I think it had more to do with over-stimulation, days of constant attention, gifts and activity and late nights spent staying up until it was dark enough for Papa’s glowing spinning psychedelic plastic flashlights to have maximum mind-bending effect.

I was practicing doing Laylee’s hair for her ballet recital and Magoo was wearing a bowtie in anticipation of his aunt’s upcoming wedding. They both kind of look like they passed out after the mini-prom. At any rate I was grateful for a camera with a silent shutter. Wouldn’t want to disturb their slumber… or you know… annoy the other church goers who were still able to pay attention over the sound of Magoo’s snores. 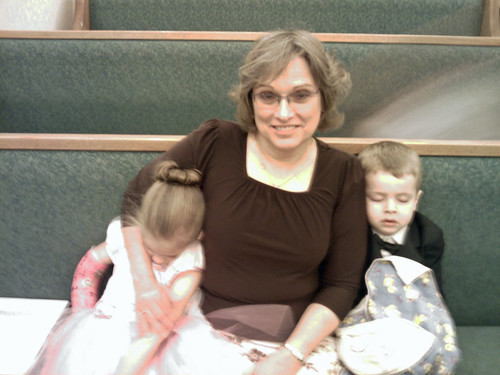 This entry was posted in kid stuff, unbearable cuteness. Bookmark the permalink.

13 Responses to Sleep of the Spoiled