Today was May Day. It was also Saturday. Saturday is a day to rejoice.

Magoo is only allowed to play video games on Saturdays. He loves them so much that he refers to Saturday only as “My Lot of Game Day.” I’m not honestly sure if he even remembers what it’s actually called.

The other night he was getting into bed on a not-Saturday night and he said, “Mom? Do you wanna know something magical?”

Sheepishly he pulled my Nintendo DS out from behind his pillow. “Look what I found,” he grinned. “It just appeared… under my pillow… like magic.”

“Did you take it from my room?”

There’s sort of a parental gray area where misbehavior and honesty are concerned. On the one hand, you want to give your kids credit for telling you the truth and admitting when they do something wrong. You want them to keep confiding in you so you don’t want to come down too hard on them when they tell the truth.

At the same time, you don’t want them to think it’s okay to become a heroine dealer, sleep around, and kidnap other people’s pet gerbils as long as they fess up quickly after the fact. It’s a tightrope we walk, balancing the olive branch of honesty in one hand and the hammer of “YOU DID WHAT?” in the other.

In general, my balancing act looks something like this: 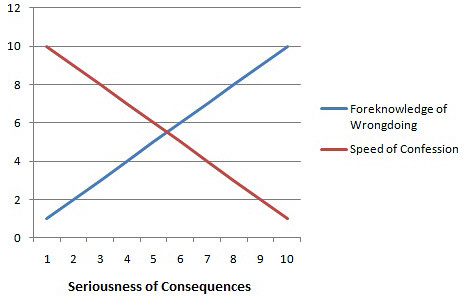 Notice that as the child increases in foreknowledge that what they are doing is wrong, the seriousness of the consequences increases. Also, if the child confesses quickly, the consequences will be less severe than if, for example, they reach a 10 on the graph which involves lying repeatedly, blaming a sibling for the wrongdoing and possibly swearing a blood oath of innocence before finally confessing to the misdeed after hours of intense interrogation, including but not limited to, denying the child food while eating Mike and Ikes 3 inches from his face.

All that being said, I think any child should receive one get-out-of-jail-free card the first time he uses Magic as an excuse, but only if he does it with a huge grin on his face.

This entry was posted in kid stuff, technology, world domination. Bookmark the permalink.