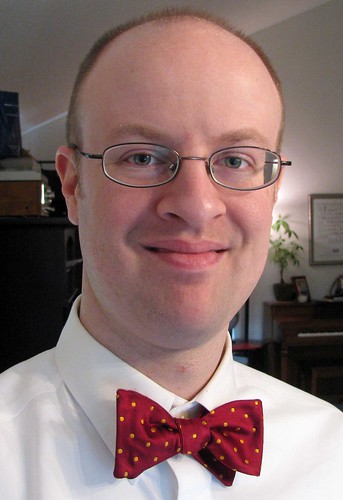 For our anniversary this December, I got Dan a bowtie, a real bowtie that you have to tie yourself and that you can pull lose at the end of the day and it hangs down on either side of your neck, a man’s bowtie.

It was my version of giving him anniversary jewelry. Plus I thought it would look hot on him. Plus it reminds me of the beginning sequence of Up, the sequence that makes every woman in America cry her brains out, where the couple grows old together and can never have kids and then (SPOILER ALERT!!) she dies and (DOUBLE SPOILER ALERT!!!) he ends up wearing bowties.

I thought it would be a sweet symbol of my wanting to grow old together with Dan and (SPOILER ALERT!!) eventually die, but mostly just grow old together and he would look all hot and distinguished and such while we were doing it.

He loved the tie but neither of us knew how to tie it and we didn’t take the time to get our YouTube on and figure it out until a couple of weeks ago.

Then this weekend Laylee and I walked down the hill from our house to buy groceries. I packed some reusable sacks in our little red wagon and we went on our merry way, holding hands and talking with very little carbon footprint.

On the way back up the hill, or as I like to call it, THE CLIFFS OF INSANITY, we got hot and sweaty. We got so hot and sweaty that my lungs nearly exploded and I had to restrain myself from showing Laylee how to dial 911 if I passed out on the side of the road. Let’s just say the wagon was a teensy bit heavier now that it contained 3 gallons of milk, several pounds of produce and a couple of loaves of bread.

I was stopped for one of our many rest breaks and I got to thinking about how the two of us must look, carting our groceries home from market, Laylee’s hair blowing uncombed behind her, our wagon full of organic milk and vegetables in their cloth sacks. “I’m totally playing the role of earth mother today.”

Then I looked down and noticed I was wearing a tie-dyed shirt, a tie-dyed shirt that I made myself with a group of neighbors under a tent outside last summer, all communal-like. The perfect touch.

Sometimes you dress the part without even thinking about it.

This entry was posted in around town, family fun, fashion. Bookmark the permalink.

18 Responses to Dressing the Part