Magoo started Little League this week. I’ve never seen him this excited about a new sport. It could be all the gear. (The protective cup is certainly blowing his mind.) Maybe it’s the danger of never knowing when one of the other muffin-headed kids will whack you in the face with a metal bat. Whatever it is, there’s just something about baseball that thrills him and it’s so fun to watch. 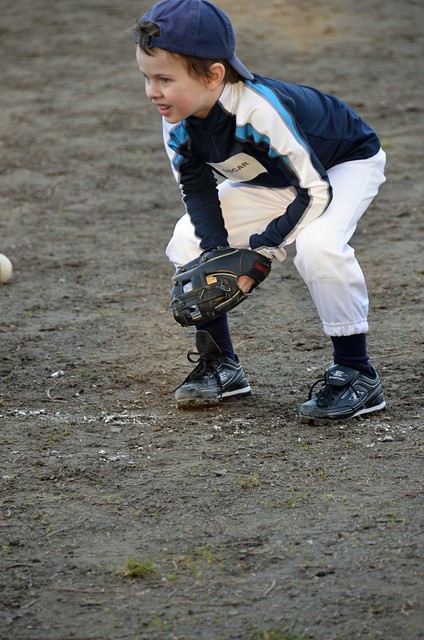 He wants to wear the batting helmet all the time, running the bases, doing passing drills, standing in the outfield. It gives him the look of an oversized bobble head, made more adorable by the perma-grin on his face.

Of course there were the usual crazy boy shenanigans. They made crude noises which were, of course, followed by raucous laughter. A couple of them walked around with mitts on their faces, pretending to be Darth Vader. None of them, however, did anything illegal. That was left to older boys, later in the week.

We were at the park, where a group of tween Justin Bieber wannabes were tearing up the playground and scaring the kids. These boys travel in a pack and they’re annoying but not usually destructive. Every couple of weeks I a-little-bit tell them off and they a-little-bit stop being annoying.

They’re loud. They run fast. They throw things. They run up the slide when littles are trying to slide down. They wear skinny jeans and those zip-front skeleton face hoodies that make Wanda cry. Personally, I think they should find a skate park somewhere and leave the baby swings to the babies.

Well, after they’d driven all the young families but mine from the park, they ended up in a pow-wow around the slide, whispering and pointing and talking about marking everything with their “gang sign”. They are twelve-year-old preppies who play at a children’s park. Quite the gang.

When I walked toward them, they dispersed and headed for home.

What was on the slide? Chicken scratch written in permanent marker. It dawned on me that I was the adult in this situation.

“Boys!” I called out in most menacing mom-ish voice.

All but one froze in their 12-year-old aviator-glasses-wearing tracks.

“Did you write on this playground equipment?”

In unison, they all pointed at their fleeing friend, already a block away on his scooter. Because that’s literally how he rolls, on a Razor.

“He did it,” one boy piped up sheepishly. None of them moved. They’re old enough to be annoying, still young enough to think I had the power to keep them there.

“Well, you can tell your friend that what he did is illegal. If I see you doing anything like that, I’m calling the police.”

No one vomited but I’d say it was a close call.

“So you’re telling me that none of you wrote on anything on the equipment this park?”

The same boy piped up, all the color draining from his face, “I, I, I just drew it on that boulder over there to show him how and then he, he drew on the slide. It’s not illegal to draw on rocks is it?” His question wasn’t belligerent. It was sheepish. He really wanted to know.

“Everything in this park belongs to the city,” I said, my voice serious as a sledge hammer, “It is definitely illegal to deface public property.”

“But I, I, seriously, I really didn’t know.” He looked like he was about to cry.

“That’s why I’m giving you a warning. Don’t let it happen again.”

They all nodded earnestly and turned to go, their heads hanging slightly. It’s a strange kind of power to be able to terrify a pack of man-children. Hopefully they’ll knock it off. But I will call the police and even more frightening, their mothers, if I see any of that behavior again.

For now, my own little man is a cute mini baseball dude. On the way to the bus stop this morning, he ran up beside me and grabbed my hand, holding it all the way to the top of the hill, even in front of his friends. He’s nearly seven and I know this kind of mamma/baby boy affection can’t last forever but I sure hope he never gets to the point where perfect strangers have to scare the cheese out of him at the park to get him to behave.

This entry was posted in around town, kid stuff, scaring the neighbors. Bookmark the permalink.