It felt like a betrayal of pencils and chalk and teachers’ mugs full of bad coffee. This year, for the first time ever, I did not order school pictures for my kids.

I have a camera larger than a VW Bug, I thought. I’ve totally got this.

We haven’t had great luck with school pictures in the past and they cost more money than my collection of Boy Band MP3s, which, not to brag, is extensive. It was a win-win because I could save money, get better pictures, and feel like a sort of awesome hipster photographer mom because I took them myself with my own neck-strapped paparazzi device.

It ended up that the pictures were WAY cheaper than usual. The cost was zero dollars because I did not take them. Oops.

There are pictures of my kids on my cell phone so we will remember that they were alive this year, just not with perfectly coiffed hair or facial expressions that say, Someone just told me to smile while I’m surrounded by big white umbrellas and a mottled blue vinyl backdrop.

Well, Dan knew we weren’t doing pictures so he was confused when he came home from work one day and found a school photo package envelope sitting on the kitchen counter with Magoo’s name on it.

“What’s this?” he said, picking it up. “I thought we weren’t ordering school pictures.” 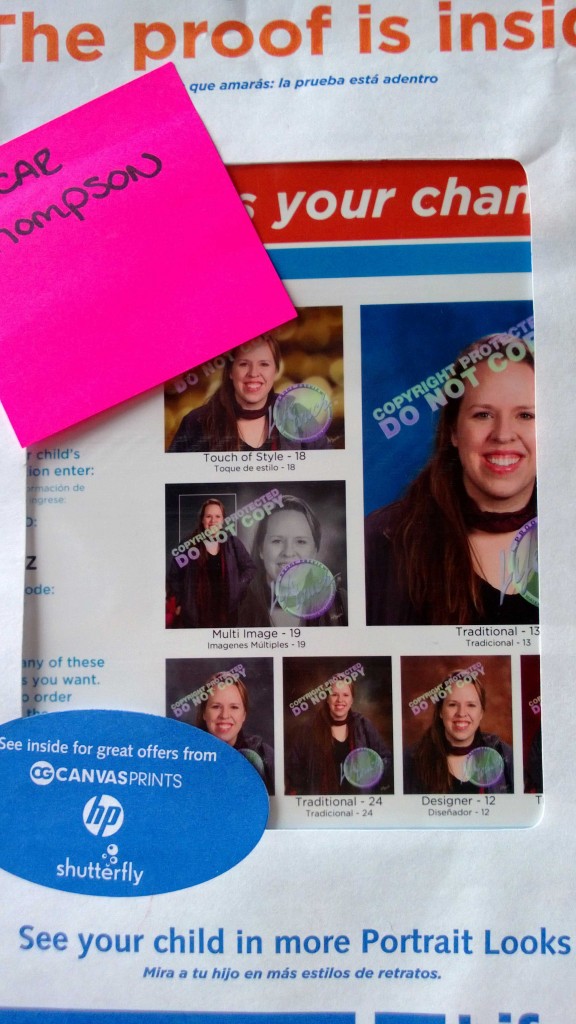 “Wait. What? Why are all of Magoo’s school pictures actually pictures of you?”

“I snuck into Magoo’s school, waited in the photographer’s black supply trunk for hours with nothing but the birds, angry, angry birds to keep me company. I bided my time and just as the photographer commanded him to smile, I burst from concealment and jumped in front of the camera. ‘Boo-ya! PHOTO-BOMBED, CHUMP!’”

“No, seriously. Why are you in his pictures?”

“They take pictures of all the school volunteers so they can make us name badges and they… um… sent mine home with Magoo so they had to put his name on the package.”

I think Dan found that explanation slightly disappointing. Didn’t we all?

But, the good news is, I do have my own child ID cards now from the National Center for Missing and Exploited Children. So, if Dan ever loses me in a mosh pit or a sea of clearance purses at Macy’s, he’ll have an easier time helping the police track me down. 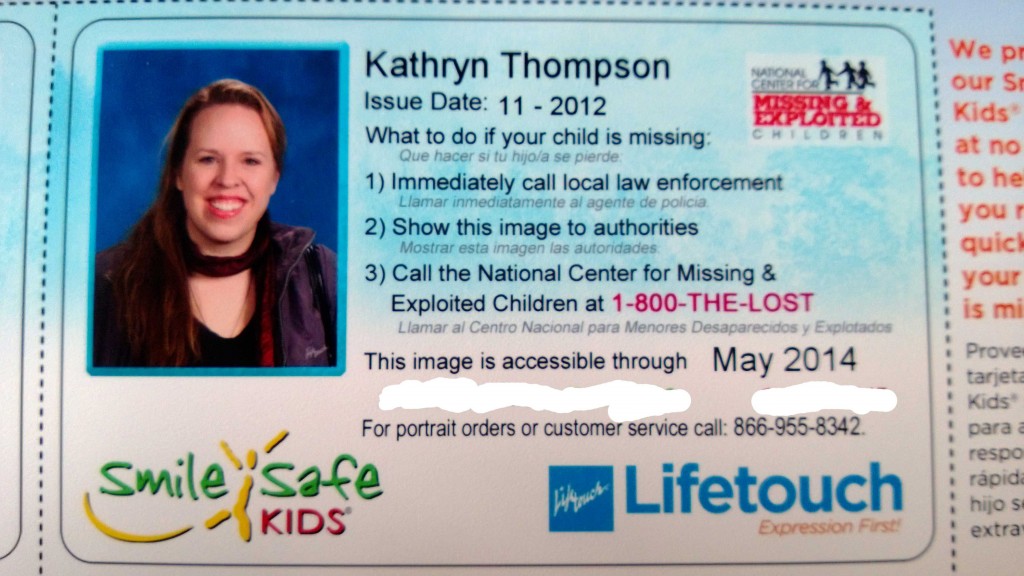 This entry was posted in child abuse, education, fun, fun, fun, scaring the neighbors, What Thompsons Do, world domination. Bookmark the permalink.