Laylee is TEN! Her oldness and lack of being young astound me. You feel me? 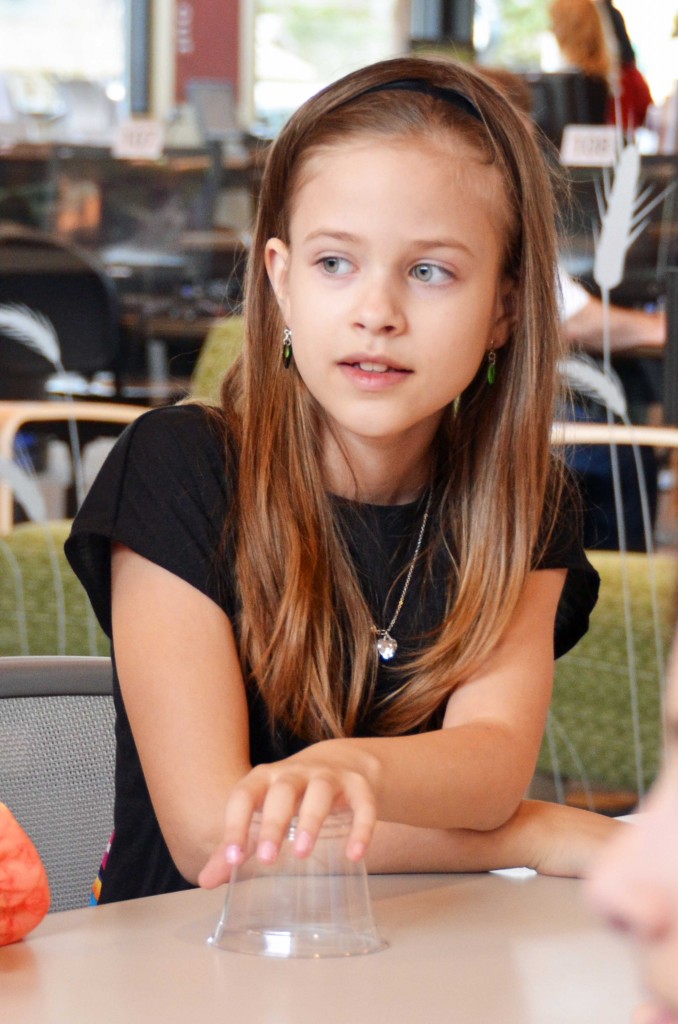 Laylee’s a book nut, so her birthday parties often revolve around favorite literary masterpieces. A couple of years ago we did a Princess Academy theme and this year it was The Mysterious Benedict Society by Trenton Lee Stewart. If you haven’t read the series, I highly recommend the books. They’re fun, sweet, smart and exciting. Dan actually likes them better than the Harry Potter series.

Book parties work well for me because they’re fun, inexpensive, close to home, and they get all of Laylee’s friends reading something together.

This series is about a secret society of extraordinarily gifted children, recruited by Mr. Nicholas Benedict to save the world. They are fighting against an evil man named Ledroptha Curtain who has built a “Whisperer” machine that controls the minds of all the people it broadcasts to. Much of the work the children do involves solving riddles and puzzles, and escaping the evil 10-men, a group of suit-wearing assassins.

So for our party, I recruited Laylee’s friends to help us build an anti-whisperer (made of spray-painted garbage found in my recycling bin and garage) to stop his evil plot. 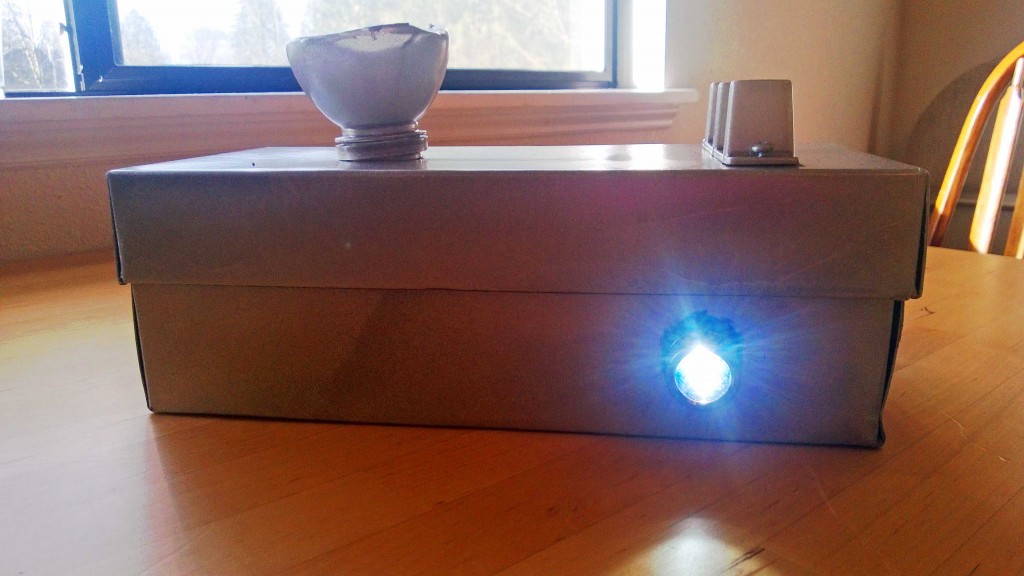 Laylee is turning 10 and we’re celebrating with an adventure.

Mr. Nicholas Benedict has an important mission that only these girls can complete. I’m afraid to say that the fate of the entire world rests on their shoulders.

They must use their greatest skills, cunning and teamwork to stop the mysterious Mr. Curtain who plans to take over first Duvall and then the world. Mwahaha!

And… they’ll only have 2 hours to do it. We will be going on the adventure rain, snow, or shine so dress appropriately. It is likely the clues will lead us all over town. We will come back to the library at the end for cake, if we make it out alive.

(Please consider reading the first book in the Mysterious Benedict Society series by Trenton Lee Stewart prior to the event, although this is not required.)

The day of the party, I stood outside of the library to greet the girls, dressed as Number 2 in my mustard yellow clothes and red wig, chomping on a carrot. (Number 2 always nibbles on something because she never sleeps and therefore needs more energy to keep her going.) 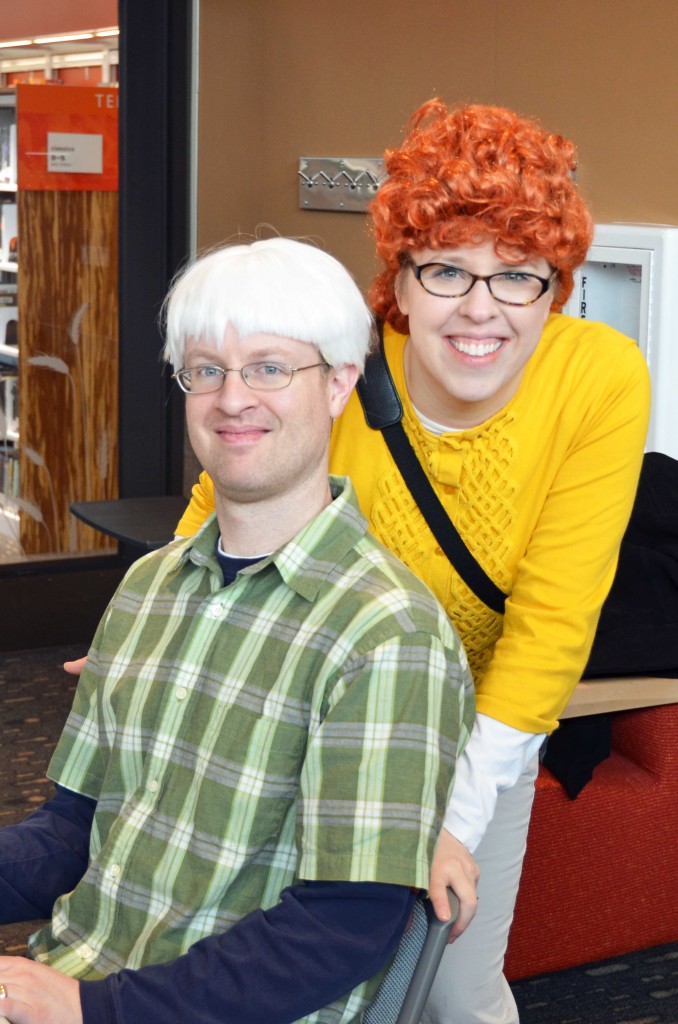 I checked them in on my clipboard and sent them to our base in the library meeting room, where Dan, dressed as Mr. Benedict, greeted them and gave them a briefing on the seriousness of the situation and what would be required of them. 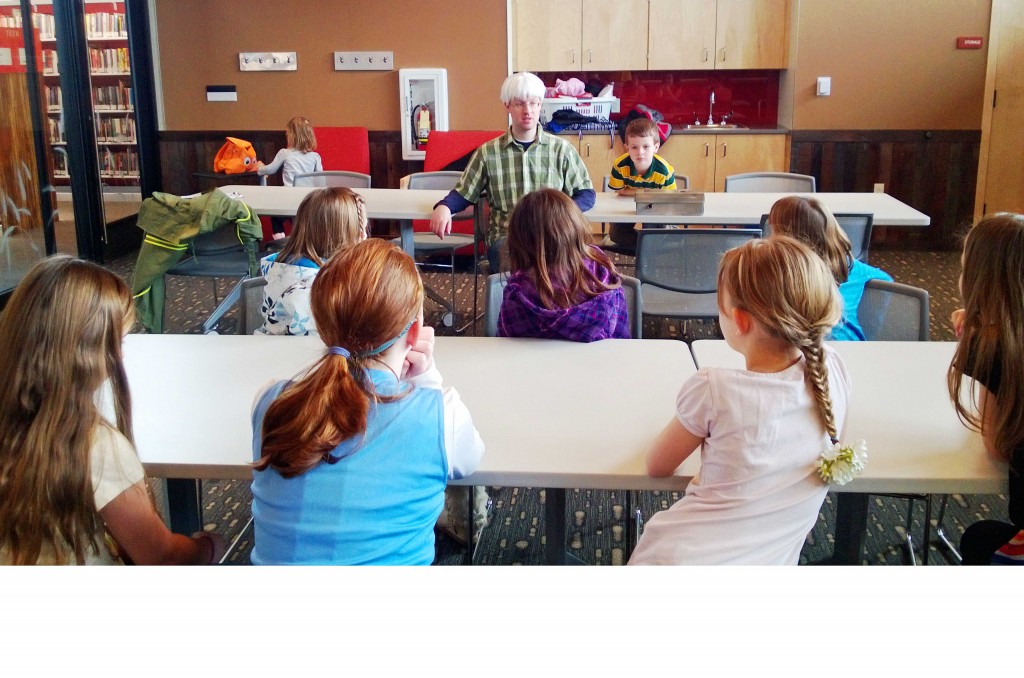 Periodically, he would fall asleep, as the narcoleptic Mr. Benedict is prone to do, and I would catch him before he hit the ground. Amazing acting skills on that Dan Thompson. He told the girls to start their quest by speaking to the person who gives directions to dead trees. 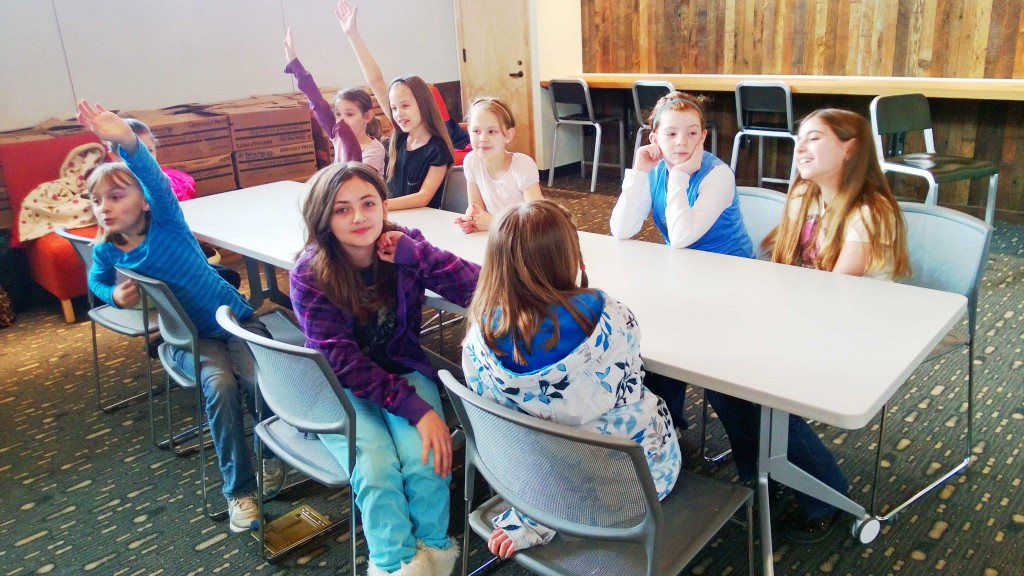 The Librarian! She gave the girls their first clue: 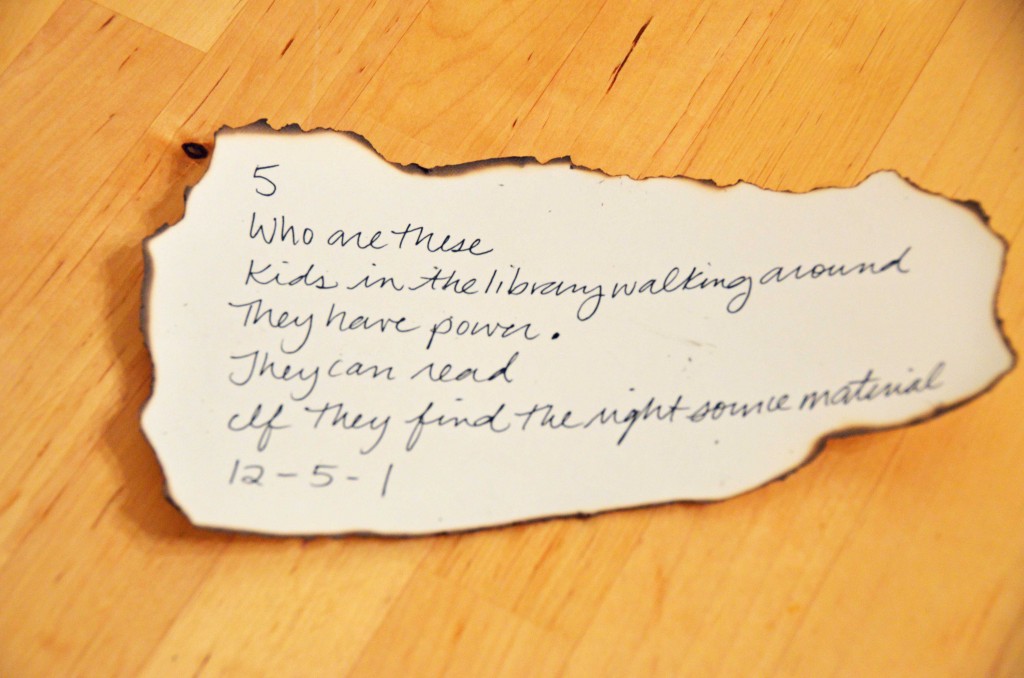 The numbers represented letters and number of words in each line represented a number. So we ended up with a call number that took us to a book about firefighters. The firefighter book had the following clue. 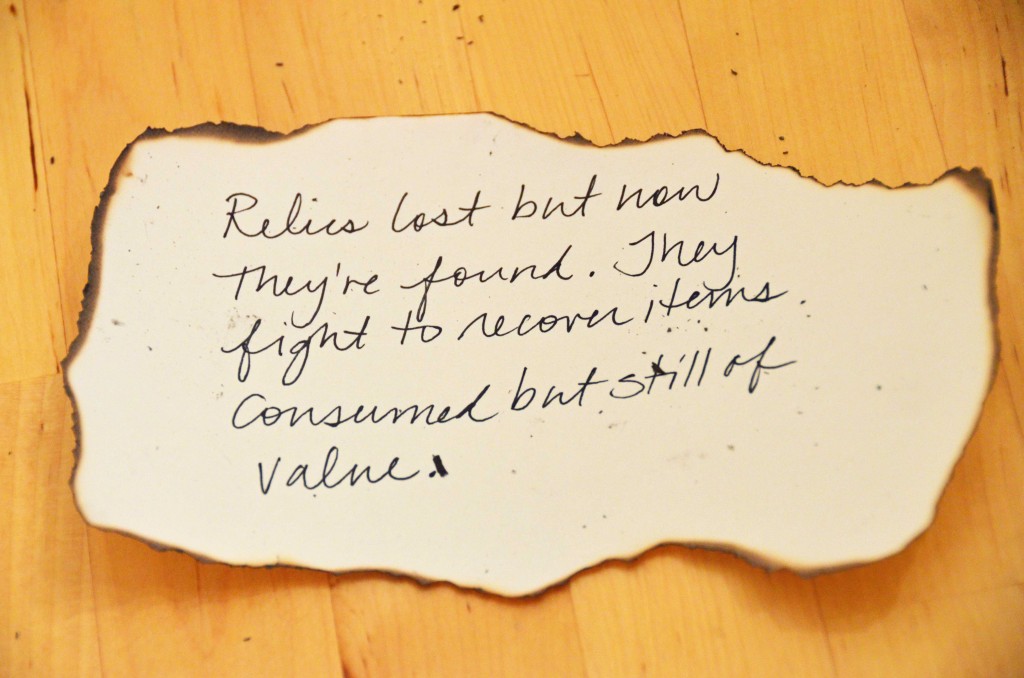 So we headed to the fire station, where we found a piece to our machine and another clue. 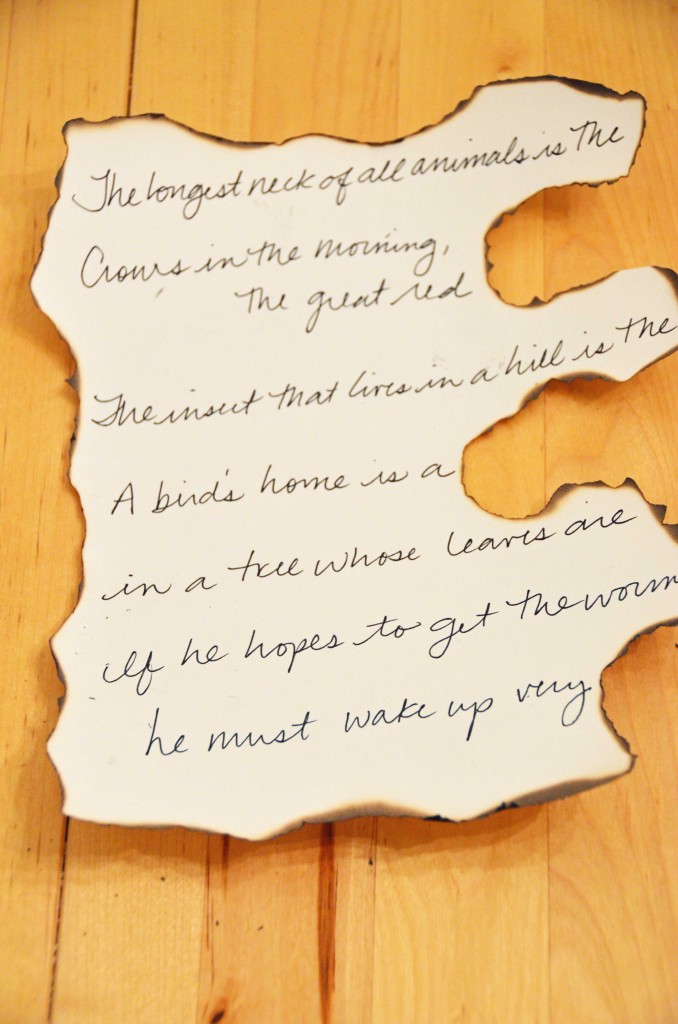 So, the burned edges work with the fire station clue because it’s supposed to be a relic taken from a burning building. But once I started burning edges, I was physically incapable of stopping so I burned all of them. It gives them a certain mystery and I really really like lighting things on fire.

On the way back to the base to decipher the clue, I realized that the party was going much too quickly so I told the girls I had seen a 10-man near the library and we would need to take the long way around, several blocks out of our way to avoid being seen and possibly captured. We marched all over town before ending up back at the library.

They solved this clue by figuring out the missing words and then using the first letter of each word to form a new word, “GRANGE”.

“THE GRANGE!” they all yelled. “I KNOW THAT PLACE!” 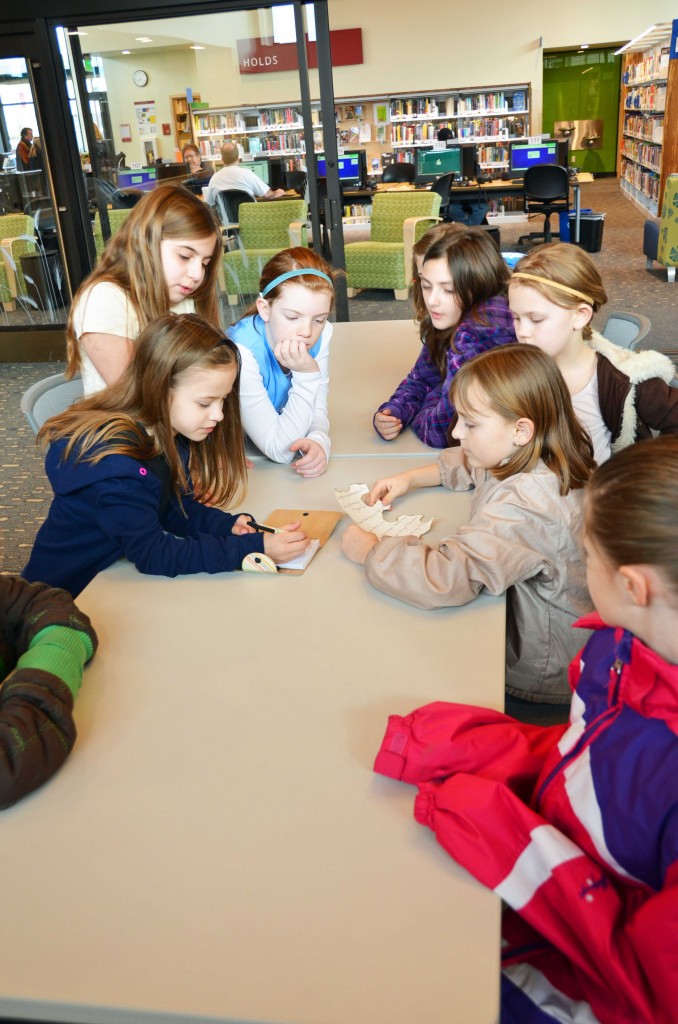 So we headed to the Grange, all the girls thrilled that they were figuring things out on their own. 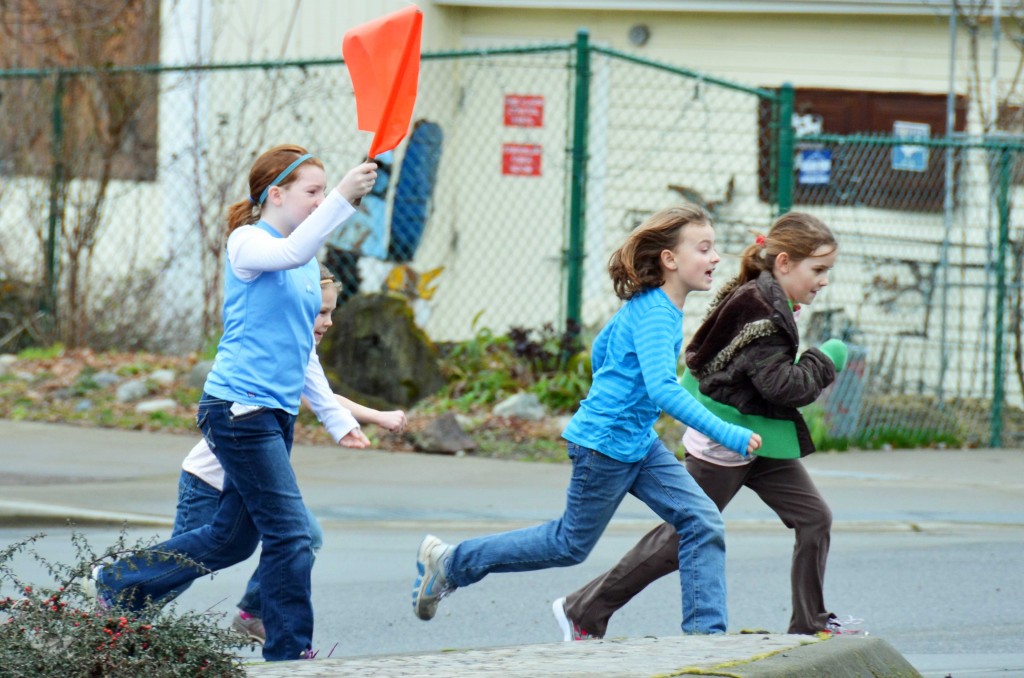 The final clue led us (maybe too obviously) to the giant clock located out front of City Hall. 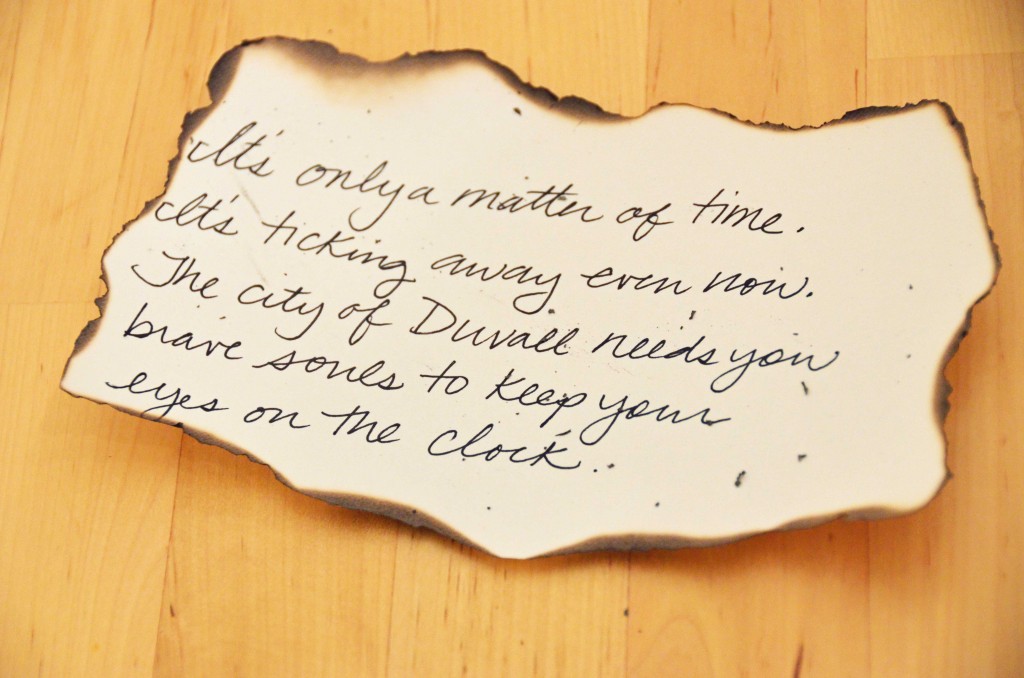 Now, at this point, the girls thought I had made up everything about how the 10-men were here in Duvall, following us around, trying to thwart us, but as we headed out the library doors, they saw a suspicious man in a dark suit and glasses standing across the street, right in front of the clock… with a briefcase… and watches on both wrists.

“It’s a 10-MAN!” they squealed and dropped to the floor inside the library.

My friend Mike, an actor who I’d asked to help with the party, was right on time. I told the girls I’d distract him so they could go retrieve the clue. They watched with bated breath as I crossed the street, bumped into Mike and ran off down Main Street, with him in hot pursuit. When we were out of site down an alley, the girls hurried across the street and found the clue tucked under some shrubbery near the clock. 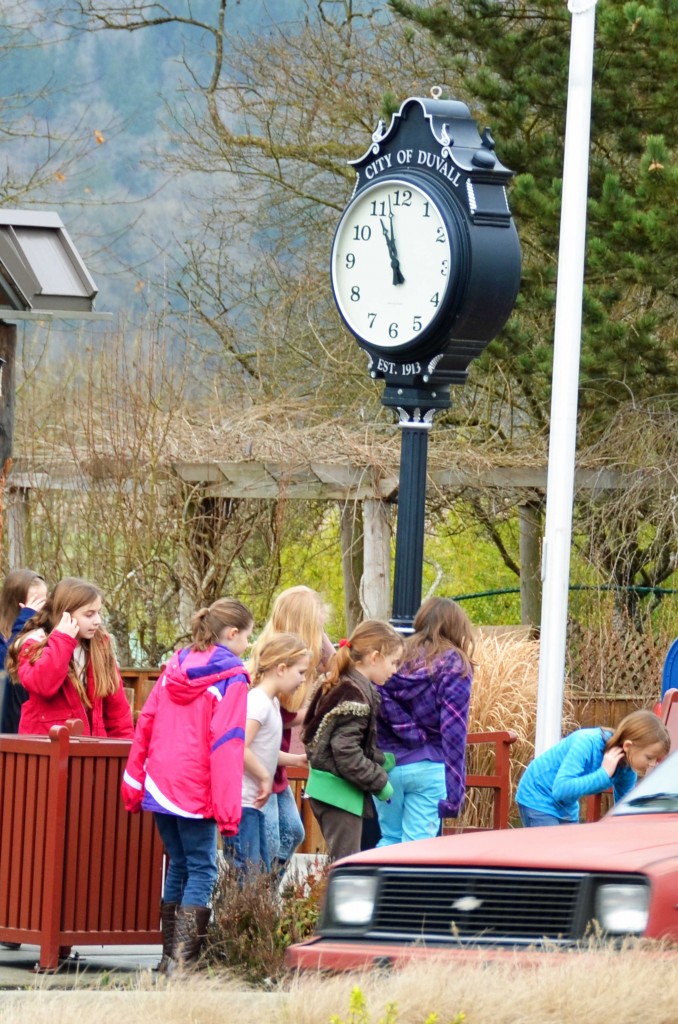 We didn’t get a picture of Mike chasing me, or even one of the 10-man, but Dan’s cousin Jeanie who was visiting for the weekend depicted it like this: 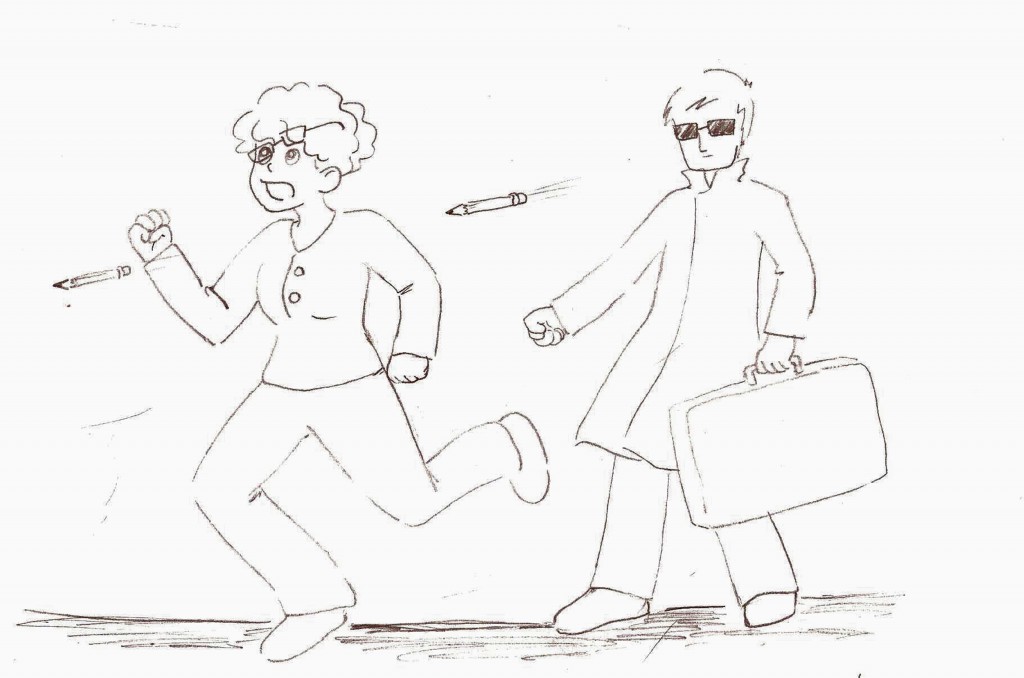 The final piece of the machine was the back end of a flashlight. When screwed on, the machine lit up and then we could follow the final clue and celebrate. 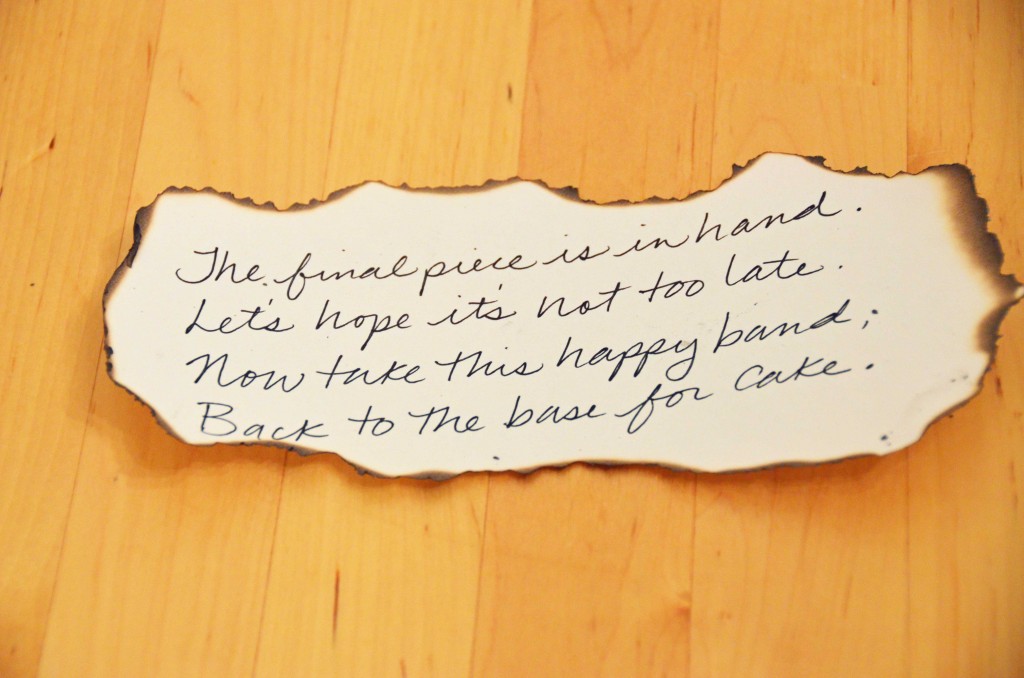 Overall, I think it was a success. One girl mentioned to me that it was pretty embarrassing to be walking around town with me in that wig so I told her to walk further ahead if it made her more comfortable but, for the most part, they completely played along.

The party favors were little red buckets, meant to be similar to the red bucket from the book, carried around by main character Kate, full of supplies that can be used to get you out of any sticky situation. I gave them each a flashlight, a cool pencil, some licorice “rope,” an eraser, and a kaleidoscope, because Kate carries a kaleidoscope that secretly doubles as a spy glass. 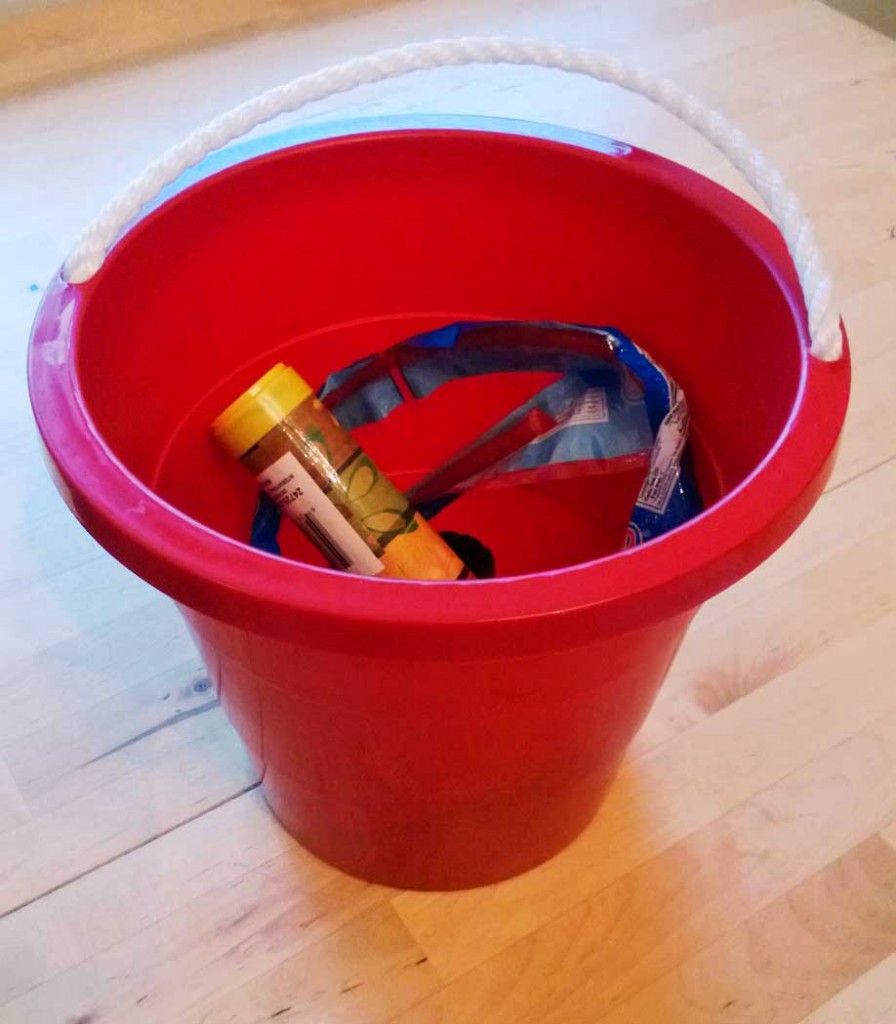 If I had it to do over again, I would have made more clues and made them harder to decipher. I would also have used Morse code. But I can’t really complain. Laylee’s happy with how it turned out, and the world has been saved.

This entry was posted in around town, family fun, I can read, kid stuff, scaring the neighbors, What Thompsons Do. Bookmark the permalink.

16 Responses to A Mysterious Birthday Party