Sometimes passive voice is needed. Sometimes mistakes are made. Jars of applesauce might even be smashed on the garage floor.

We had a gaggle of delightful family members in town this past weekend for Magoo’s baptism. Yay! He decided to do it. Fun was had by all. Baptisms were performed. Memories were created. 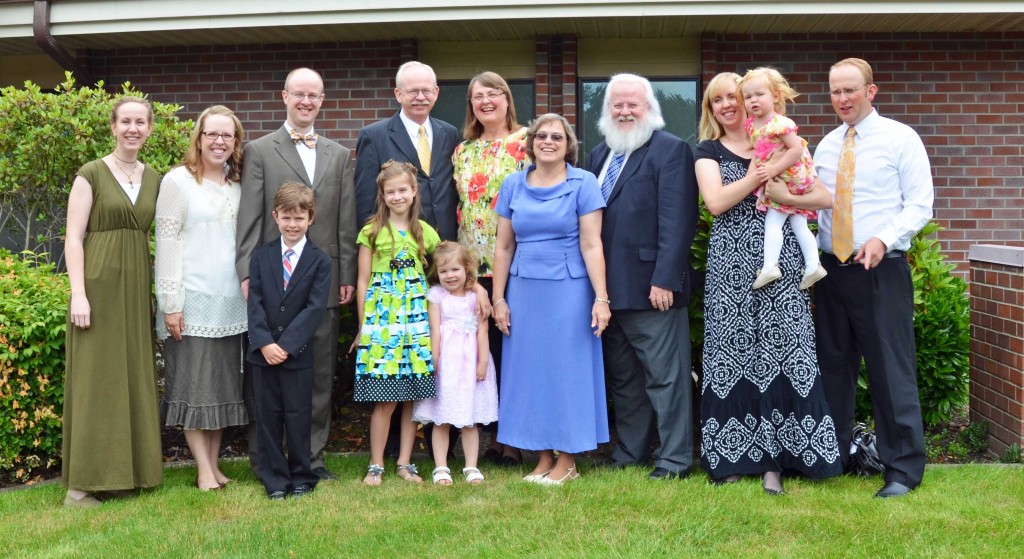 With any big family event, there’s a certain level of stress. Never mind that our parents worked like fairy slaves, fixing fences, hauling junk out of our back yard, cooking food, and replacing shower heads, all while giving frequent gifts to the children and babysitting them so I could get my hair done and go grocery shopping.

The stress builds slowly, almost imperceptibly, until your husband asks you if you’re feeling anxious and you stretch a crazy sort of smile and say, “No. Not anxious. Just alert. I don’t want anything to go wrong.” Then you shove your fingers in your mouth and bite down hard with exaggeratedly wide eyes.

When the baptism was over, the neighborhood lunch was finished, everyone special was made to feel special, we were settling into a nice groove of lying around on the living room floor playing games on our individual electronic devices.

He was cleaning the kitchen or rescuing an old lady from drowning or something, but he stopped and came out to the garage, where I stood frozen in place.

“Applesauce is smashed on the ground,” I said, staring at it blankly.

Someone called from inside, “Is everything okay out there?”

“Yeah. Kathryn just smashed some applesauce on the ground.”

Awkward silence as we both looked at the broken glass and liquid fruit splatters.

Dan – “Do you need something?”

Me – “I didn’t smash the applesauce. It became smashed. Mistakes were made. I do not claim responsibility.”

Me – “And can I have some paper towels?”

Dan – “There’s a roll right behind you.”

Someone else from inside – “Do you need anything out there?”

Dan – “It’s okay. Kathryn just smashed some… Applesauce was smashed. It was no one’s fault.”

Me – You know that’s right.

I didn’t need him to fix it. I just needed him to stand and stare at the sauce with me, to recognize my non-responsibility, to stand and look at me in a way that said, “I know you put a ton of planning into this weekend and acknowledge that the smashing of the applesauce by reason of a maliciously placed sticky mouse trap in no way reflects your abilities as a host, a wife, or a human being. Mistakes were made. You are a keeper. Now, why don’t you take two minutes to wipe it up, while I go back inside and finish saving that old lady from drowning or whatever I was doing?

This entry was posted in blick, disasters, domesticality, faith, food, he's so fine he blows my mind, save me from myself. Bookmark the permalink.

9 Responses to Mistakes Were Made