I Tried so Bad!

Lately the kids in our family add “so bad” to the end of any sentence to mean they are really serious about what they’re saying. Examples:

*First off, I want to say, if you have a fear of spandex, skip this post and come back and read tomorrow. I promise not to post so many pictures of myself in uber tight clothing probably ever.*

So today, I tried so bad! I completed the sprint triathlon. It started with going to bed early last night, only to be awoken by a crazy loud thunderstorm. Stephanie, my training partner, said she got up during the storm and checked today’s weather report, nervous about the swim. I convinced myself that it was just a dream and went back to sleep, a sleep in which I apparently twisted my arm in half and pinned it beneath my body, because when I woke up, I had pain shooting up and down my arm, radiating from the elbow every time I put pressure on my arm to do things like lift a cup, or cut my eggs with a fork.

On a normal day, I would have skipped working out and iced the arm, but today was TRI-DAY! So committed was I to this triathlon, that I asked myself the question, “If I were an 1800s pioneer woman, crossing the plains with ox and wagon, would I keep going with this level of pain, or would I tell them to leave me behind to be eaten by American dingos?” The answer was not dingos, so I knew I had to “tri.” Ah, that pun never gets old. Ever.

One of my favorite parts of the day has to be when I was taking one last break in the ladies’ room before the race. I’d had a feeling all morning that I’d forgotten something, and when I dropped my drawers, I almost had a heart attack. I wasn’t wearing any underwear! Now you’re not supposed to wear underwear in a tri-suit, but I don’t usually walk around in a tri-suit. You’re welcome. And I was caught off guard. Like, I started a mini-hyperventilation. How could I forget UNDERWEAR!? Oh. I breathed in and out and moved on.

When the swim started, I had planned to hang back and wait before jumping in, but was overcome with excitement and ended up diving into the melee, feet, arms and bodies all up in my face. Pretty soon we all got sorted out and I finished my ¼ mile swim in my fastest time ever! This included the swim and the run up to the transition area, an area that always reminds me of child birth, but only because of the name.

They say that transition is the “fourth discipline”, but I think the real fourth discipline is the massive nap I took when I got home. I did it so well. I even took off my tri-medal to maximize sleeping potential. 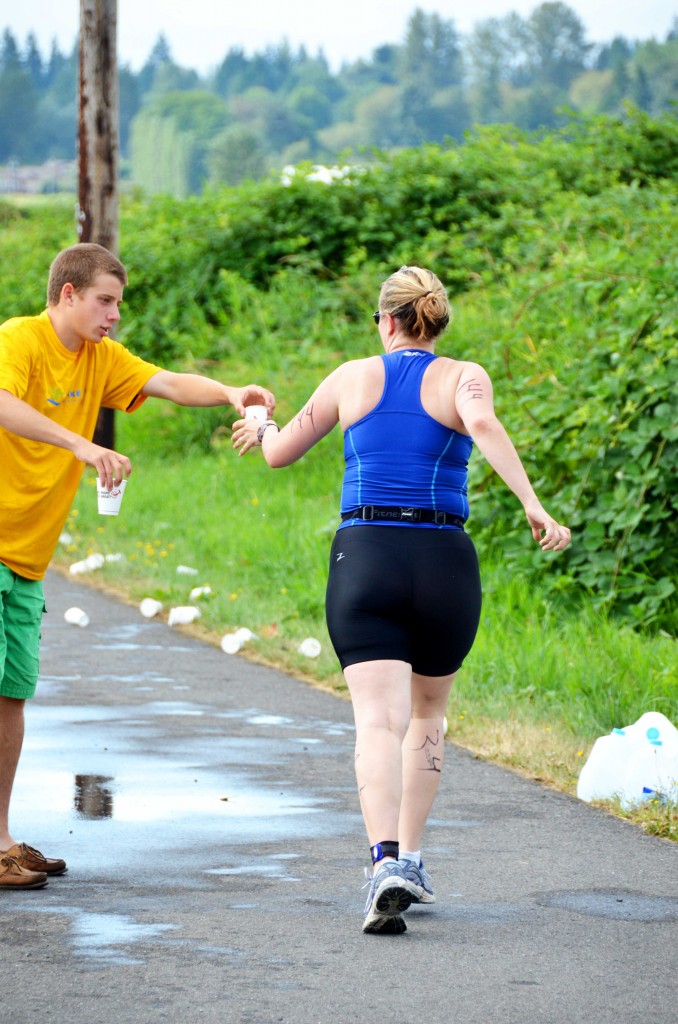 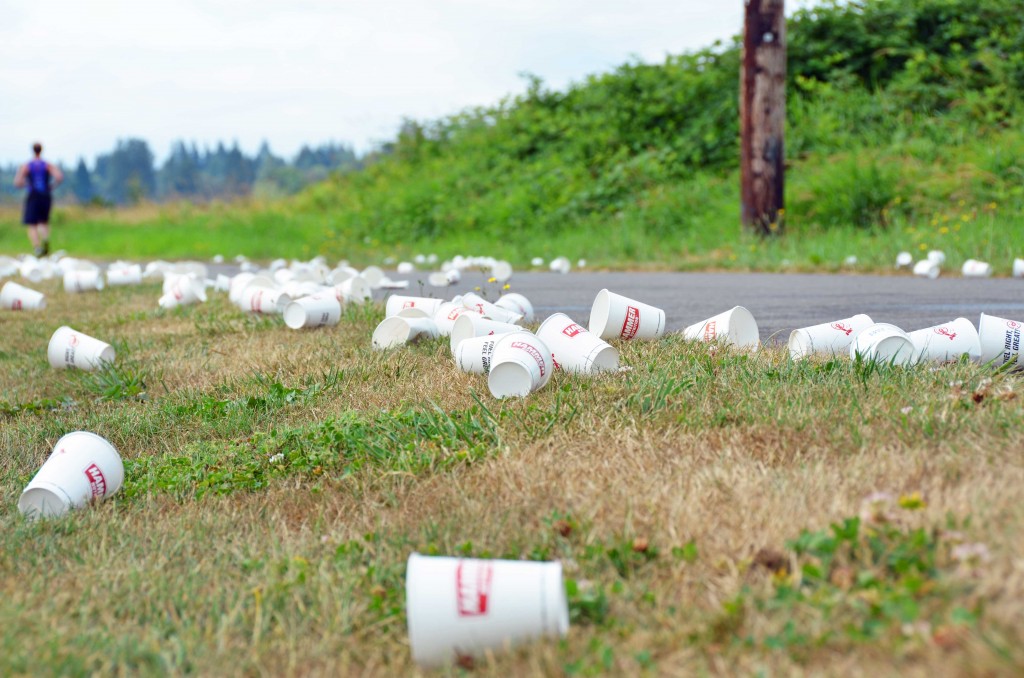 Dan and the kids cheered me on at all the water stations and the finish line and I couldn’t help but run faster when I heard them. At one point, I ran by them as they cheered, took pictures and called my name. I pointed to each one in turn and yelled, “I’m passing you… and you… and you.” They were the only people I passed on the run. But it felt good to pwn them so hard. They were just sitting there, like they didn’t even know it was a race. 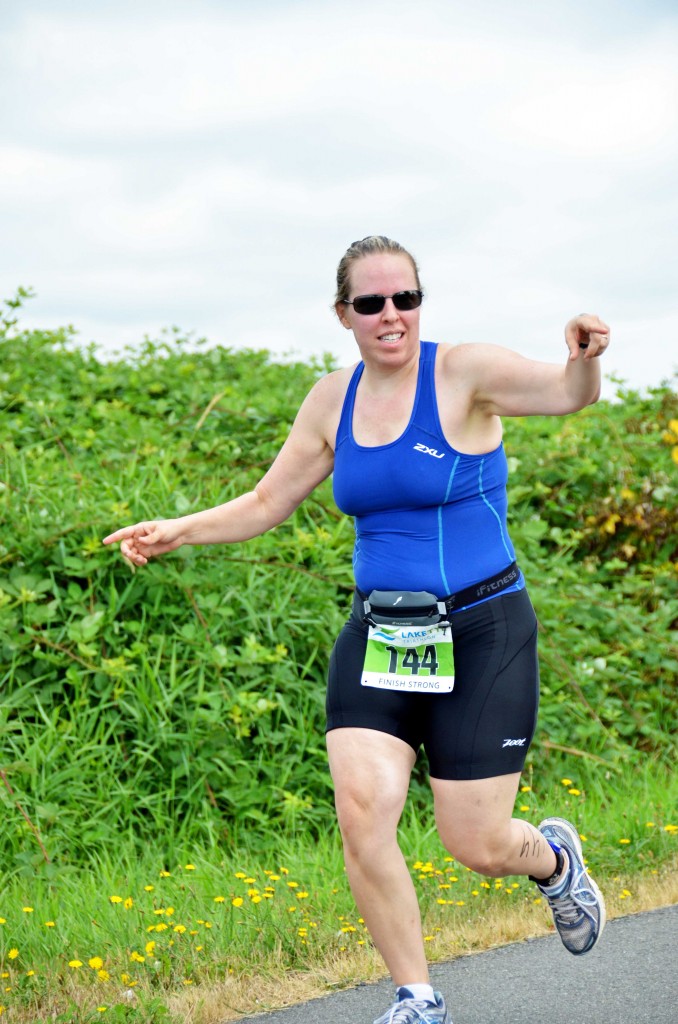 A few seconds after I passed by, after I made eye contact with and berated each one of them, Wanda yelled, “Was that mom?!”

The only time I cried was during the run. I was really struggling to get going. You’re on a bike going a million miles an hour and then you try to run and it feels like you’re in a hamster weel with boneless legs. It’s the oddest feeling. Also, I had not one ounce of energy left. So I started out running, until I had cleared most of the spectators, and then I switched to a busy mom mall walk pace. 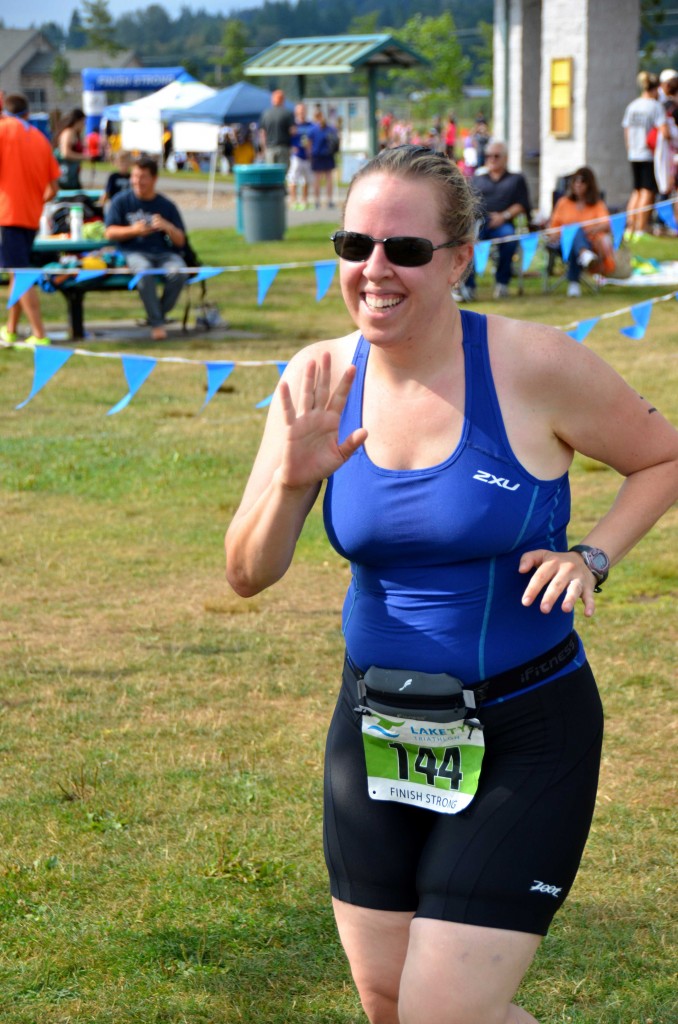 Runner after runner passed me, some of them doing the Olympic distance, which is twice as far as the sprint I was attempting. They were like muscly, sweaty gazelles and I was like… not that. I only had to run a 5K to finish this thing and I was walking fast but slower… and a bit slower. Then the awesomeness started. Runner after runner, most of them male and much more fit than me, started saying encouraging things as they passed me.

They said these things quietly and continued on their run, but I just had this swelling behind my eyes, overcome with the goodness of people. If I were a hardcore athlete, would I take the time to tell the mom mall-walking her way to the finish line that she was good enough, that I understood she was doing something really hard and needed encouragement? I hope so. But I know these guys did and it made me cry and it made me walk faster and eventually run. 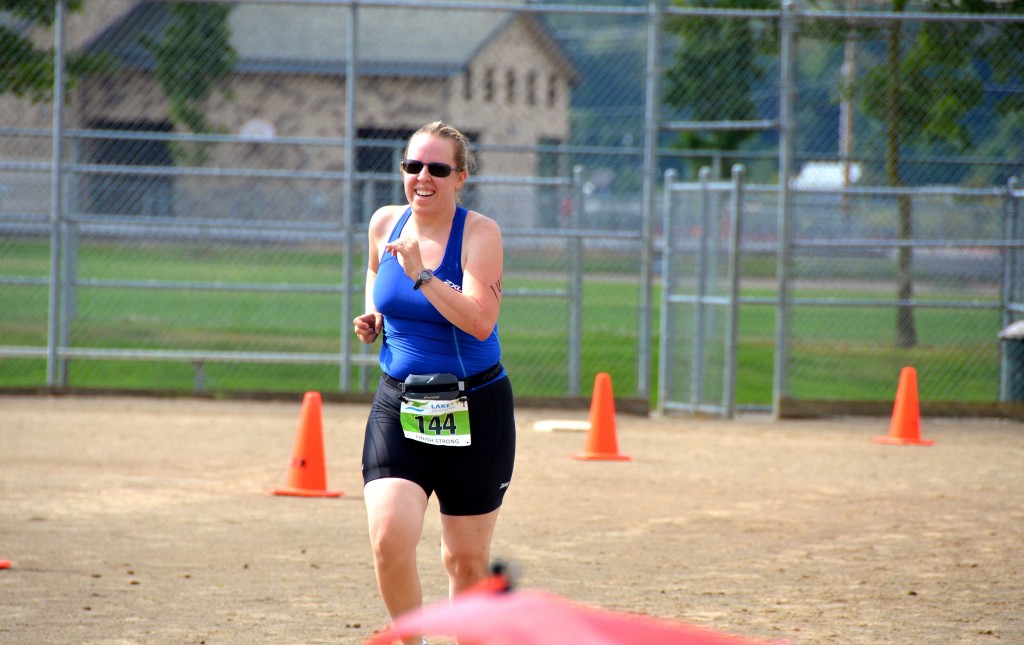 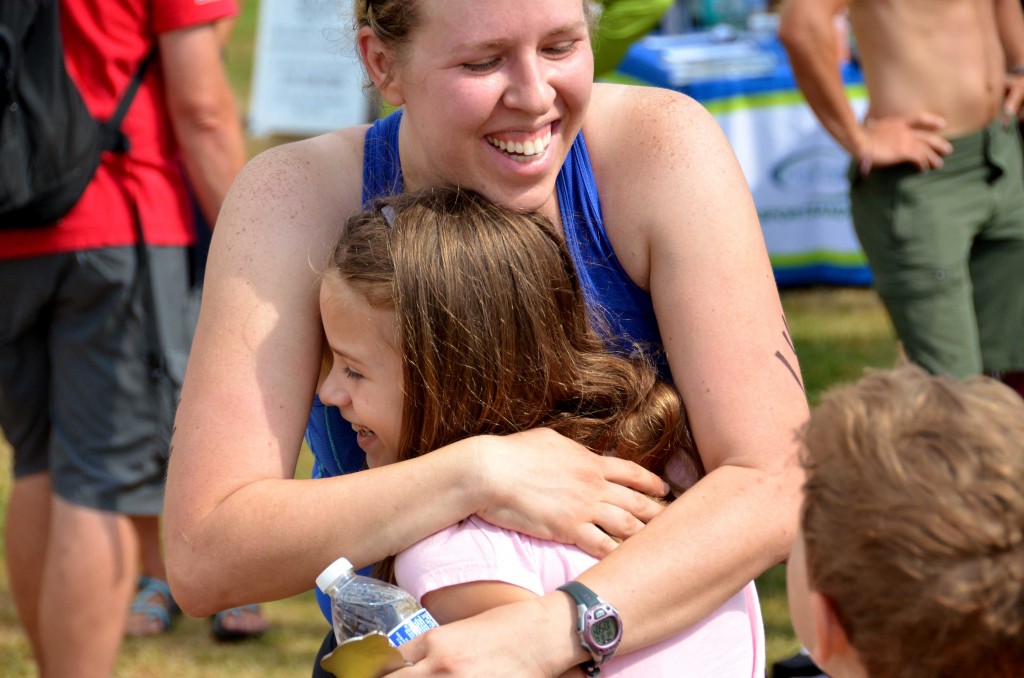 And I beat every time goal I set for myself. 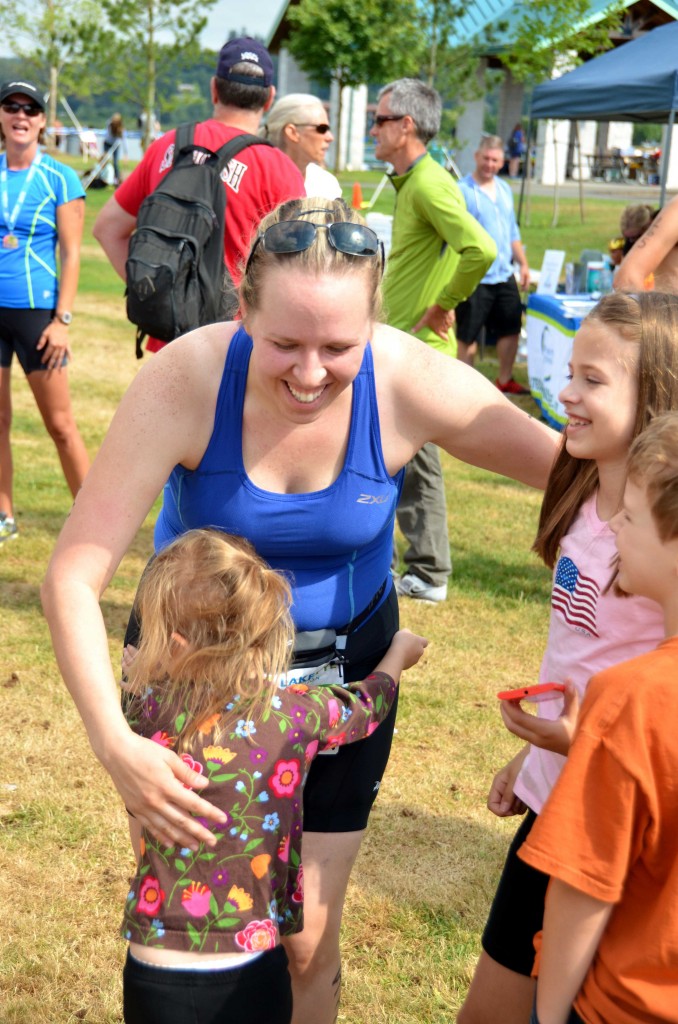 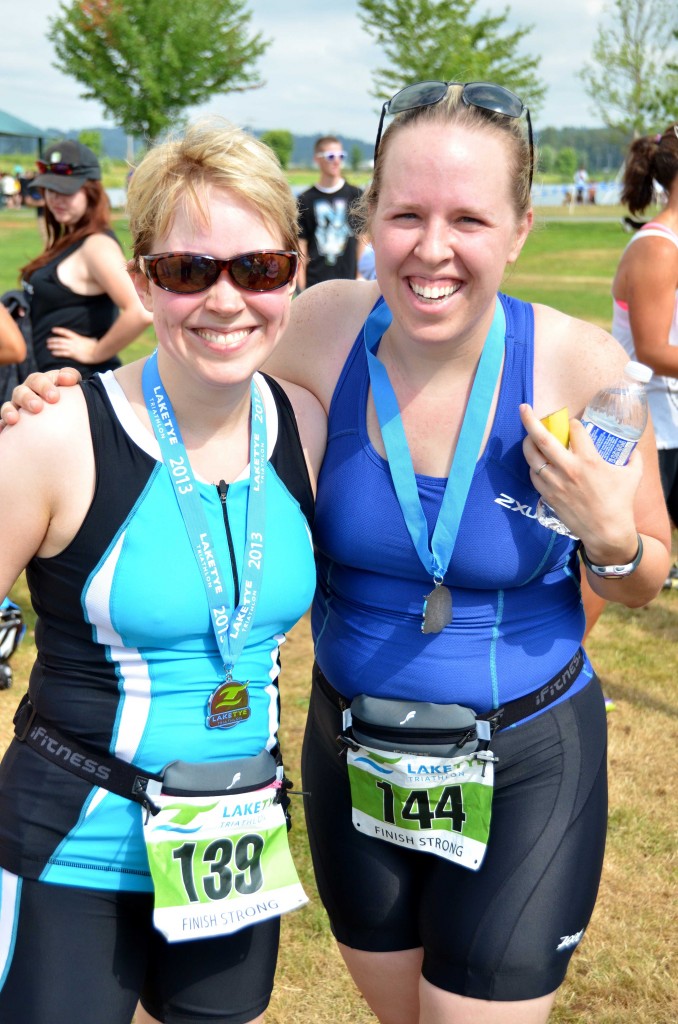 And like the woman at the check-in table said, “This is your first triathlon? That’s exciting because whatever time you get will be your new personal best.”

You know what? She was right! 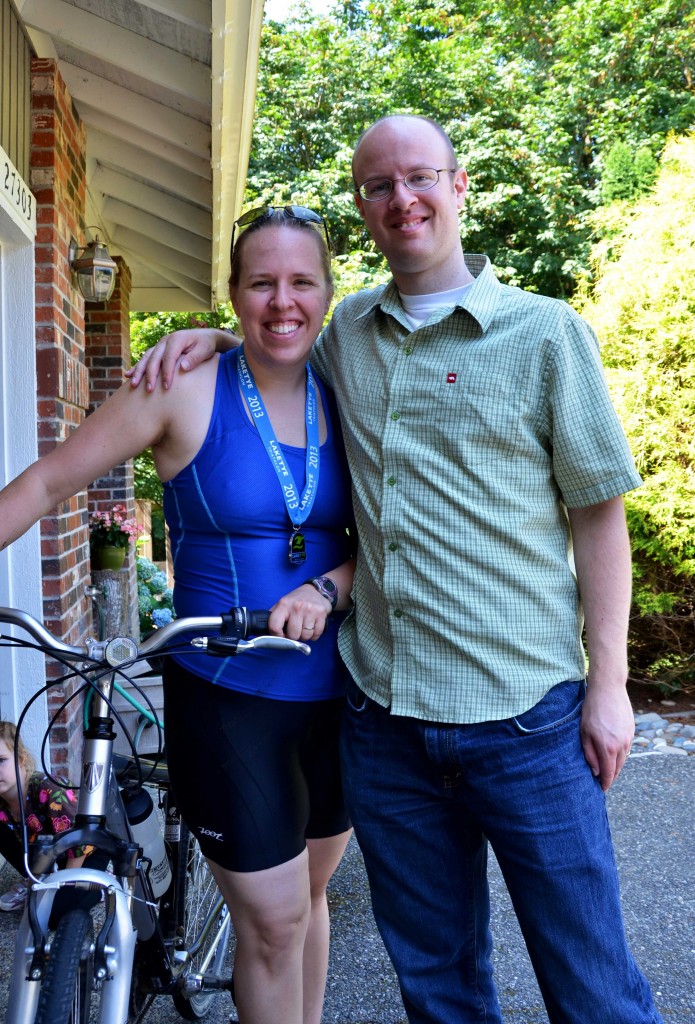 This entry was posted in all about me, aspirations, health. Bookmark the permalink.

25 Responses to I Tried so Bad!