Slugs sick me out. They make me want to vomit. If you’ve never stepped on a slug with your bare feet and felt it pop, you might not be emotionally equipped to understand what it feels like to truly hate a slug the way I have come to hate them. That being said, I’ve made it one of my many diverse missions in life to help my kids be okay with slugs.

When they see a slug, I compliment it. “Wow,” I say, “What a cute slug friend. We should name it.” Or, “Aren’t we lucky that we have slugs to leave sparkly trails all over our front door and car door handles? People who don’t have slug friends wish they were us.”

Maybe this is disingenuous. I prefer to think of it as positive psychology or self-deception for the greater good.

So, Wanda is convinced that she loves slugs and they love her back. She talks to them, adopts them, cries when we wake up to a slug-free morning. One thing she never does is touch them. This is telling. I can say I think a boy is cute, but if the thought of touching him makes my skin crawl, I probably don’t like him all that much.

So, last night Wanda left her shoes out on the lawn by the trampoline… so the balls and shovels and popsicle sticks wouldn’t be lonely. Tonight when she was coming in after a parentally-mandated, screaming-fight-with-her-brother-motivated cease and desist order, I told her to bring in five or ten shoes from the area around the trampoline.

She began gathering them up and soon screams erupted. “AAAAHHHH! MOM!!!! They’re in my shoes. THE SLUG FRIENDS ARE IN MY SHOES!”

I couldn’t help laughing. I could help taking a picture of her distress but I chose not to. 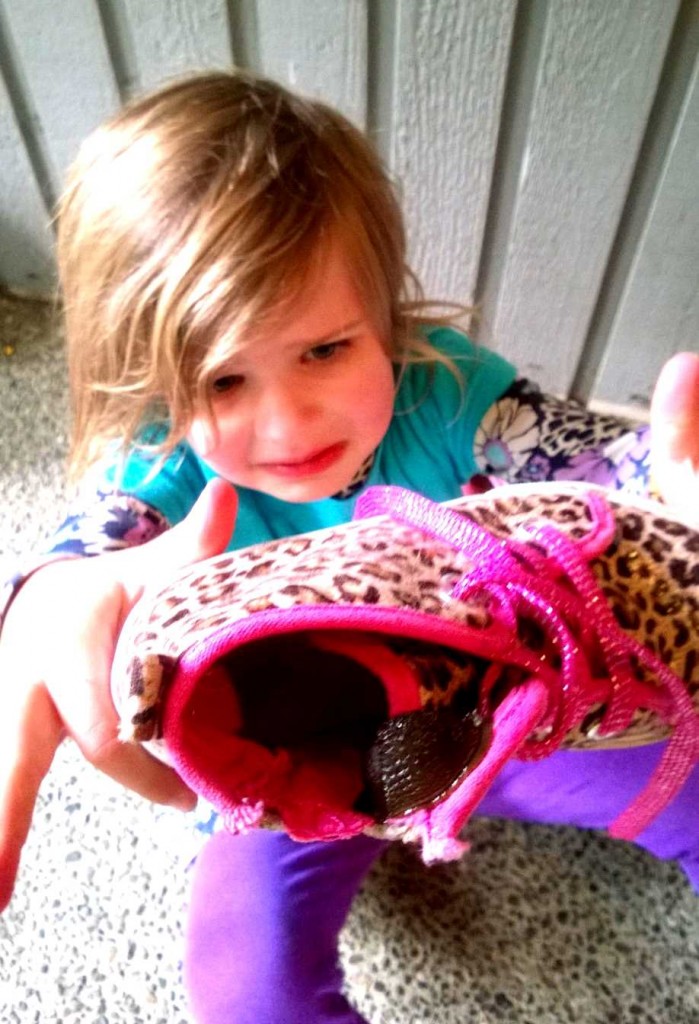 My favorite part is probably the position of her fingers as she tries to hold the shoe with as little of her hands as possible. Eventually, I made my way out to the front porch to shake the slugs out of her super fast cheetah shoe. Four slugs people. Four invaders. Or so I thought.

One more slug had somehow clung to my person as I came inside and several minutes later Laylee noticed it shlumped on the middle of the living room rug.

I was busy sitting, so I asked Laylee to get a kleenex and flush it down the toilet. She looked at me like I’d asked her to fill her own bed with rat babies, but eventually agreed. “Oh… kaaaaay.”

She left to grab the tissue.

She returned with hands full of half a roll of paper towel, bunched up into a toddler-elephant-sized wad.

“Aaand I guess you won’t be flushing that.”

She giggled nervously. But she bravely did the deed. Slug friend was disposed of and we salute the many trees who gave their lives so our house could be free of living slime.

When we say our family prayer each night, every person gets a chance to say one thing they’re thankful for that we then incorporate into the prayer.

Tonight, Magoo said, “I’m thankful that we got rid of all the slugs in our house… probably.”

Laylee said, “I’m thankful that the slugs are gone.”

Wanda said, “I’m thankful that there are no more slugs in my shoes.” She then gave a cheery smile and continued, “Isn’t it cool that we all said slug things for the prayer?”

I prayed tonight and when I got to the slug portion of the oblation, I said, “And we’re thankful that we got rid of all the slugs in our house.”

This entry was posted in blick, disasters, kid stuff, poser in granolaville, save me from myself. Bookmark the permalink.