Gearing up for the Second Coming

We weren’t gonna watch the game. We’re not football people. We hadn’t watched all season. Sundays are more a churchy day than a sports day for us. We were not jumping on the Seahawks band wagon on the day of the Super Bowl as though we could name even one player on the team, as though we had somehow earned those Lil’ Smokies or the guac and chips.

But the 12th man flags started to get to me on Friday and by Saturday morning, I had decided we’d better jump on the train as it zipped by. Church was a sea of blue and green, with the lone Broncos fan conducting the meeting boldly in his orange tie. I didn’t see any actual Seahawks gear but it was obvious that people had extracurricular activities on the brain.

So, after church Dan and I sat the kids down for a lesson in the rules of football and we all watched their first game together. Luckily, I’d just turned the cable back on for the winter Olympics. Squee!!

We didn’t teach the kids every possible rule of football and of course the first thing to happen was a safety. What?! We got to explain a lot of fun things that night and the kids came away die-hard Seahawks fans.

Tomorrow the boys in blue and green make their triumphant return to Seattle and there’s going to be a big parade, which we will not attend, and a bunch of families are playing hookie from school, which we will not be doing. But Seahawks fans and wanna-be Seahawks fans will be wearing their football gear tomorrow. I didn’t think much of this until I picked my kids up from school today and saw the staggering number of kids wearing Seahawks shirts and jerseys. And today is only Seahawks Eve!

So, since this bandwagon makes stops at Target, I just thought I’d “look” and “see” what they had. And many dollars later, I walked out with 5 Super Bowl championship T-shirts. Magoo and Wanda are elated.

Wanda has been obsessed with The End of Days lately, asking me when the last day will be and whether the sky will turn all silver. It’s slightly creepy but makes for interesting conversation and I told her that the last day will be when Jesus comes again, and not in a manger but with angels and fanfare and all that jazz.

So today, she was talking about how much she LOVED her Seahawks shirt and how she would wear it tomorrow for the big parade that she’s still not convinced we’re not going to and then she said, “But then you need to wash it.”

“Because on the last day, when Jesus comes again, I want to dress like Seahawks.”

Dan says she’s the first person he’s ever met who has her outfit planned for the Second Coming. 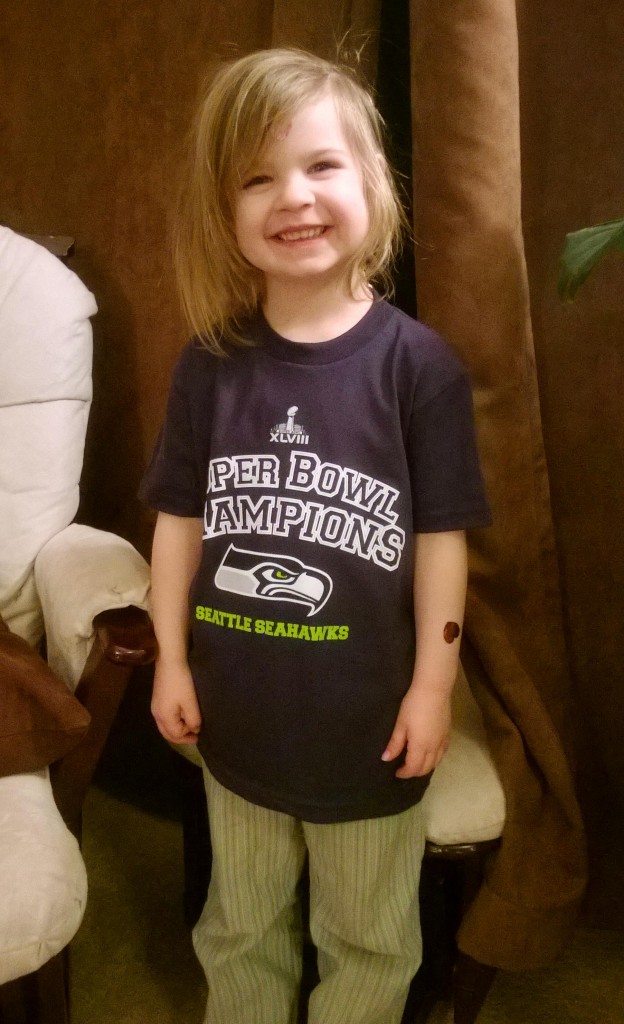 And she will look amazing.

This entry was posted in around town, faith, fashion. Bookmark the permalink.

3 Responses to Gearing up for the Second Coming